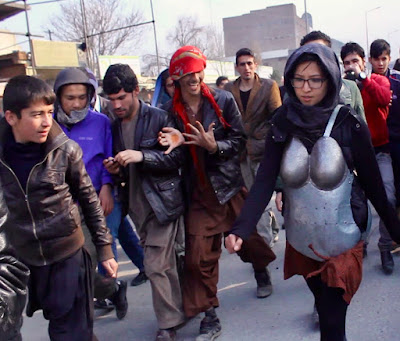 My blog post published several days ago, on January 20, 2020, commented on the fact that some people apparently need to be reminded that "Racial Trauma Is Real." The provocative photograph above, which ran in The New York Times on January 18, 2020, is a reminder that this is not the only kind of trauma that is "real."

Martin Luther King, Jr., and the Civil Rights Movement, helped make us aware of just how deeply entrenched in this nation racial prejudice has been (and continues to be). The photograph above, taken on the streets of Kabul Afghanistan, illuminates another kind of trauma, and a trauma that exists on our streets, too. If you don't know what I am talking about, this story in the most recent edition of The New Yorker might ring some bells.

A salute to artist Kubra Khademi and the #MeToo movement, with thanks for reminding us how much work we still have to do to eliminate violence against women:

On the afternoon of Feb. 26, 2015, the artist Kubra Khademi strapped a suit of metal armor over her clothes and headed outside. The armor, which she had cobbled together in the workshop of a local blacksmith, had bulbous breasts and an ample bottom. It was the centerpiece of a carefully planned street performance.

Only this wasn’t just any street: It was a busy thoroughfare in Kabul, the capital of Afghanistan. Sheathed in her bulging suit, Ms. Khademi walked along the road in a silent eight-minute performance. By the time she left, traffic had stopped and a mob of menacing men had formed.

“They were insulting me and making fun of me, saying ‘She’s crazy, she’s a foreigner, she’s lost her mind, she’s a prostitute,’” the artist recalled in a telephone interview from Paris, where she now lives. “Yet, had I not put on this performance, I would have been unhappy. It was a complete success. It shook everyone up, and brought the debate brazenly out into the open.”

Ms. Khademi said her performance reflected everyday reality for women in Afghanistan, who face sexual harassment and aggression everywhere — at home, at work, on the street.

“There isn’t a single woman in Afghanistan who hasn’t been violated on some level in her lifetime,” Ms. Khademi said. “We live in a culture of violation.” She recalled suffering sexual abuse at age 5, and longing, as a child, for protective armor.