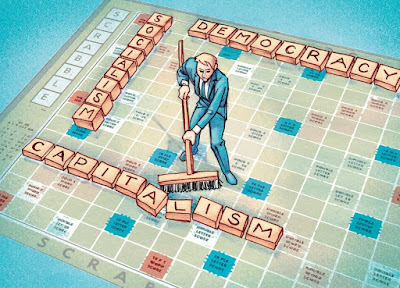 OK. Great. I am willing to concede that point. But then, "socialism" isn't a "system," either. At least, that's what I would argue. "Capitalism" emphasizes an economic order that maximizes the benefits of individual choice and individual investment - the "market economy." "Socialism," on the other hand, empahsizes the benefits of collective approaches to social and economic problems. That's how I see the difference. These are different approaches to making decisions about our economic and social concerns. Neither of them is really a "system," stand-alone, self-contained, and pure. Of course, I am not much of an "-ism" guy.

Swaim definitely is an "-ism" guy. He is a "capitalism" guy. He doesn't treat "capitalism" and "socialism" in any equal way. "Capitalism" is not a "system," according to Swaim, but "a socialist economy is, by definition, a system."

Hint: the way Swaim sees it, "systems" are bad and deny us freedom.

I'd like to suggest that after the benighted guy pictured above sweeps "capitalism" off the board, he should put the broom to "socialism," too. Let's stop fighting about "systems," and start talking about realities.

"Democracy" is where we should be putting our attention.

From my perspective, any economic arrangement that privileges money over people (and that's how I think "capitalism" works) is virtually certain to come up short where our collective economic health is considered. In fact, that is exactly our current situation, characterized by massive income and wealth inequality.

On the other hand, emphasizing unilateral governmental control of all economic decisions, in one of those so-called "planned economies" associated with "socialism," can also produce truly horrible results. There are lots of examples.

What can work - as much as anything associated with our flawed human decision-making capacities can work - is "democracy." However, genuine democracy means that we all need to be in the decision-making mix. The key decisions should not be made by those with the most money ("capitalism") or by those who are securely lodged in governmental offices ("socialism"). "WE" need to be making the decisions. It's that "We, the people" thing.

"Democracy" requires our continuing personal investment and involvement in government. That means we need to work at it. Lots of people feel most comfortable letting someone else make the key decisions. Those with money have gotten the nod in our nation, and they are using the money they control to make sure it stays that way.

It's not inevitable. It's not even a "system," though analyzing our situation in systematic terms can be enlightening.

"Democracy," of course, is not about analyzing and understanding what is happening to us. It is all about making things happen the way we want. More action than observation and analysis, in other words.

I am all for democracy. But then, I have never been much of an "-ism" guy.