Pictured above is Louis Proyect, who characterizes himself as an "unrepentant Marxist." Proyect is far from an uncontroversial figure. Some call him a Nazi sympathizer. However, Proyect does have a following. In 2017, his "Unrepentant Marxist" blog got its five millionith hit. The photo above, by the way, may be of a younger Proyect. When I searched for images to post here, there were a few that showed a considerably older person.

ASIDE:
As I wrote this, about how the picture above might misrepresent how Proyect appears in the present, it suddenly struck me that my own self-portrayal (as presented in the left hand column on my blog) might be thought, by some, to convey a more "youthful" image than would be strictly realistic. Here's how I look as I am typing this blog posting onto my computer screen. Just the facts, Ma'am! 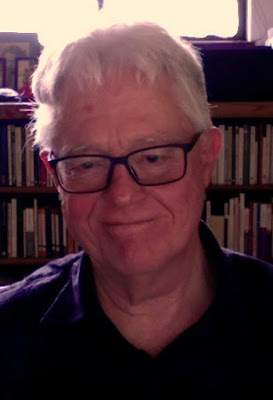 At any rate, I have been subscribing to "The Unrepentant Marxist" for quite a while. Before jumping to too many conclusions about what this tells you about my politics, let me inform you that I also subscribe to bulletins from the Tea Party PAC. I am trying to "walk my talk" when it comes to arguing for a civil discourse among those who have fundamental policy disagreements. I even subscribe to the president's White House blog (though I am not one of the president's Twitter followers).

On December 27th, Proyect wrote on "Limits: Why Malthus Was Wrong and Why Environmentalists Should Care." CounterPunch republished this piece under the title, "What’s Wrong With Malthus."

I think Proyect's blog posting is worth reading. It is basically a review of a book recently authored by Giorgos Kallis, a political economist from Greece. Proyect rejects the most common understanding of what Malthus argued, and states his support for a "degrowth" agenda, but one based on socialist, not capitalist, principles:

Ultimately, Kallis is in search of a philosophical worldview that can make limits an expression of freedom rather than bondage. Drawing upon his heritage, he holds up the Greek republic as an exemplary model even if you take into account the retrograde treatment of women and slaves. As an analogy, Marx and Engels (as well as Ben Franklin) admired the Iroquois confederacy even as it exhibited the same sort of brutality toward its enemies. What they all had in common was an understanding of the need for equality, living modestly, and having respect for the natural world ....

As made clear in my CounterPunch article “Ecological Limits and the Working Class,” I am a degrowth advocate and even come down on the side of emphasizing footprints and over-exploitation. I cite Hickel’s article “Is it Possible to Achieve a Good Life for All Within Planetary Boundaries?” that violates Kallis’s strictures even though I am deeply sympathetic to his call for returning to the ethos of self-control and moderation.

What worries me, however, about the degrowth literature in totality is its usefulness to a revolutionary movement. Unlike the Green New Deal, what are the political implications of degrowth? What is a possible slogan? Stop building new factories? Or ground all Boeing 737’s, Max or not?

Unlike the Green New Deal, degrowth only makes sense in a post-capitalist society. If social and economic equality were universal, it would not generate opposition since a sacrifice would be shared equally. You can see a foreshadowing of such a social compact from an article titled in the December 14th Globe and Mail titled, “The climate crisis is like a world war. So let’s talk about rationing.” Eleanor Boyle, the author of the op-ed, also wrote “High Steaks: Why and How to Eat Less Meat.” Such a book is necessary even if it is mostly irrelevant to people making $8 per hour who can barely afford a Big Mac. Under socialism, we should develop the kind of egalitarian ethic that allows everybody to enjoy a steak as long as it doesn’t compete with land dedicated to quinoa cultivation.

Proyect thinks that efforts to combat global warming should not be premised on, or result in, the deprivation of those not now benefitting from the economic successes (and excesses) of capitalism. That sounds pretty fair, to me!