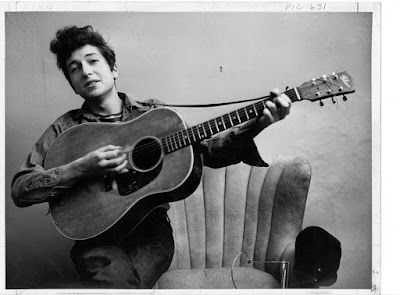 Literally the day after I had written that blog post from yesterday, I read a pretty long interview that Bob Dylan gave to John Cohen and Happy Traum, published in Sing Out magazine, whose final publication was in 2014. That Sing Out interview with Dylan was from October/November 1968, and I found it not by looking through the magazine's archives, but in a book called Bob Dylan: The Essential Interviews.

My blog posting yesterday (to save you the time and trouble of having to track that down) gave my opinion that it is up to us to change our politics ourselves, and that we need to stop waiting around for someone, some hero, some Master Politician, to do it for us. Hey, we tried that with Obama, right? Didn't really work. Not working with Trump, either! Even worse!

What caught my attention in the Sing Out interview was a portion of the interview in which Cohen and Traum were attempting to get Dylan to comment on his role as a leader of political and social movements for change. Looking back on a history of interviews with Dylan, a lot of interviewers seemed to want to do that, and to get Dylan to commit to the idea that he should be playing such a leadership role, or to admit that he had done so, once, and then abandonned the effort. Dylan always dodged. He refused, always, to be put in that position. Dylan did that here, too, but pay attention to the way that the inquiry was presented:

Happy Traum was clearly making reference to one of Dylan's greatest songs (one that Dylan asked Patti Smith to sing at the Nobel Prize ceremony), "Masters of War." I think Traum was hoping, by this tactic, to get Dylan to admit that he should be leading the Columbia student protests, or should be speaking out in their support.

Like I say, Dylan dodged, but what struck me was how Happy Traum - like so many, then and now - saw the politics of our world as defined between the "rulers" and the "ruled." Such a vision pretty much figures that those with lots of money and high social and economic position are the "rulers." They are looking for somebody (could it be Bob Dylan?) to come lead the effort to change that situation.

Dylan dodges because that isn't how our situation gets changed!

We should stop waiting and hoping for some Master Politician (Dylan or any other leader) to come solve our problems.

We are the rulers. Let's not forget it.