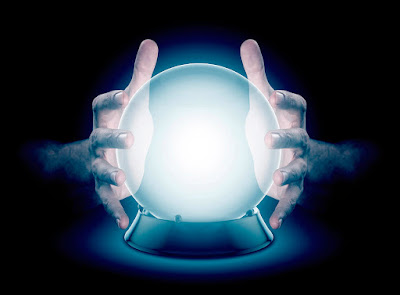 Quartz is an online news source that sends out various emails to those who sign up. One of their regular email bulletins is called the "Quartz Daily Obsession." Quartz advertises this bulletin as an "interactive email for curious minds." By subscribing, Quartz says, we can "escape the stale news cycle with forgotten histories, surprising facts, and vital stats."

I got one of those "Daily Obsession" emails not so long ago, and I found that Quartz was obsessing about the idea of "prediction." This does seem like an appropriate topic for an end of the year rumination on the meaning of things. Here's what Quartz had to say:

Humans have always been obsessed with predicting the future. By knowing what’s coming next, we’re better able to plan our actions, whether that’s saving more grain for a harsh winter, or knowing it’s a good idea to invest in a commodity because the price will go up in the future. The correct prediction guarantees success—or survival.

There’s just one problem: We’re terrible at predicting the future. Blame psychology, evolution, or the complexity of the data, but the truth is that we mostly get in our own way.

Is it possible to get better at prediction? Or, could we create systems to do it for us? Think you know what’s coming next?

Now, this is just the first paragraph of the Quartz piece on prediction. Click on this link to read the entire article. At the end, the article advises us of the following, trying to provide us some comfort, I'd say, in the face of what seems really to be an unpredictable future:

Our predictive skills may not be our greatest assets as humans, but they’re at least adequate. “Good enough is good enough.”

If comfort is what you are looking for, I guess that Quartz is offering up an analysis that serves the purpose. I, however, have a significant disagreement with Quartz and the way it treats "prediction." Quartz seems to believe that prediction ought to be, and theoretically could be, an accurate method of knowing the future.

That's not the way it works, the way I understand it. If you want to know the future, and use the various tools that Quartz says are "good enough," you may well miss the future entirely. Why is that?

That's because the only things we can really know about are the present and the past. While we can extrapolate from current trends, and thus "predict" the future based on contemporary observation and our knowledge of past history, the future, in fact, is created by what we do now, and we can always do something unexpected, and new.

In fact,  we can't, really, "predict" the future at all. What we can do is to analyze the present. Sometimes, the inertia of existing realities carries us in a direction that we have decided is probably where the momentum of past choices is taking us. Other times, using that method is definitely not "good enough."

I think it's worth repeating what I learned at a recent event sponsored by LandWatch Monterey County. I wrote about it in a blog posting in the middle of November:

The best way to predict the future is to create it.