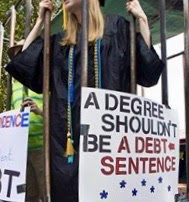 The photo above comes from a recent article posted on the Yahoo! Finance website. I think it illuminates a point worth making.

Would that this were consistently true! After we disposed of real slavery in this country we still had "debt slavery." As the Encyclopedia Britiannica tells us, this form of enslavement was not practiced solely in the United States. We did, however, definitely put it into practice in a very systematic way:

Debt slavery, also called debt servitude, debt bondage, or debt peonage, a state of indebtedness to landowners or merchant employers that limits the autonomy of producers and provides the owners of capital with cheap labour. Examples of debt slavery, indentured servitude, peonage, and other forms of forced labour exist around the world and throughout history, but the boundaries between them can be difficult to define (see slavery). It is instructive to consider one prevalent system of debt slavery as a means of identifying the characteristics typical of the condition. This article therefore describes the system that existed among sharecroppers and landowners in the American South from the 1860s until World War II.

After the end of the American Civil War and the abolition of slavery, many African Americans and some whites in the rural South made a living by renting small plots of land from large landowners who were usually white and pledging a percentage of their crops to the landowners at harvest—a system known as sharecropping. Landowners provided sharecroppers with land, seeds, tools, clothing, and food. Charges for the supplies were deducted from the sharecroppers’ portion of the harvest, leaving them with substantial debt to landowners in bad years. Sharecroppers would become caught in continual debt, especially during weak harvests or periods of low prices, such as when cotton prices fell in the 1880s and ’90s. Once in debt, sharecroppers were forbidden by law to leave the landowner’s property until their debt was paid, effectively putting them in a state of slavery to the landowner. Between 1880 and 1930 the proportion of Southern farms operated by the tenants increased from 36 to 55 percent (emhasis added).

Southern sharecroppers weren't the only ones, either:

Corporate oligarchs benefit when the economic system "limits the autonomy of producers and provides the owners of capital with cheap labour." We know what that means from our historical experience, and we should know that this is what our current system does, too.

Our economy requires an ever more educated workforce, and education, by itself, is indeed a route to liberation. Going to college can honestly promise benefits to those individuals who do pursue higher education, and there are immense benefits to our society as a whole. In other words, there is a good reason for our society to promote and provide a college education to all who want to pursue it. Free public education doesn't have to stop at a student's graduation from high school. Everyone benefits if students who want to go on to college are able to pursue a college degree.

Instead of recognizing the collective benefits of providing students with a college education, however, and thus integrating college into our system of free public education, we have constructed a scheme by which young people, hoping to enrich their lives, are in fact trapped into an endless round of underpaid work, all in order to discharge their "debt to society." The government has been complicit with the giant corporations, and has turned promising young students into prisoners of debt.

I am happy to see that presidential candidates Bernie Sanders and Elizabeth Warren have made the termination of student debt a keystone issue in their campaigns. Whatever your presidential preferences may be, I hope you will join with me (and with other voters) to demand that this system of debt slavery be ended!