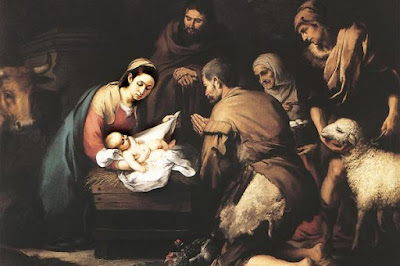 Christmas greetings to all, and just one more reference to that Barry Lopez interview that I have recently mentioned.


For Christians, Christmas is one of the most important holidays. Really, there are actually only two holidays of any significance for Christians: Chrismas and Easter. Both of these Christian holidays are imbued with profound theological significance, and in celebrating them Christians make assertions that are contrary to ordinary experience and common sense. As theologians have noted, in fact, the Christian teaching that God was born of a virgin, lived a human life, was crucified, died, and then rose from the dead, is nothing less than a "scandal."


Bahnson: Earlier you mentioned prayer and ceremony. Tell me who God is for you.

Lopez: That. [Gestures to the trees outside the window and the river beyond.] Everything outside the self. Outside the realm of “I am important”; “I” this, “I” that ...

In our lives most of us have a longing to be included. In many Western traditions when you pray, what you are saying to God is “Include me. I want to be included.” Your life becomes seeing how to be worthy of inclusion and how to include others.

You know, I had a Roman Catholic education. I never developed any antipathy for the Church, though most of my friends did. They were sometimes irate. They felt tricked. Duped. When I went to Notre Dame [as an undergraduate], I went to Mass three times a week in the dormitory chapel. In New York City, as an adolescent, I was in these little groups of five altar boys who went around to different churches in Manhattan to serve at High Mass because we knew all the performance detail for celebrating Easter High Mass at midnight, for example. We had all that stuff down tight. If the priest lost his way in the liturgy, we could quietly steer him back on course. We knew which pieces of incense were to be placed where in the paschal candle. We were locked in to all the details of the ceremony.

I began to drift away from all that in my late teens, but not in anger. It was time for me to go. Time for me to get out of that comfortable place where all my classmates were white, Catholic, male, and middle-class ... There was something I couldn’t define about my education that made it feel incomplete. That soon led to coming back out west, where I grew up. I came to Oregon to get an MFA, though I quickly saw that the program was not much good — for me. I did meet some people there at the university who became very important for me — Barre Toelken [in the English department] was one of them. If there were any people of color or Native Americans or Asians in that very white town, they always turned up at the Toelken house for dinner. I thought, Yeah, this is more what I was looking for.

Lopez: Yeah. And a greater awareness that the Roman Catholic experience I’d had was bounded. (Christ, of course, was not.) What was I going to do about that? I’m still working my way through this. I don’t want to throw away half a lifetime of understanding the Divine in terms that I was comfortable with. I’m reminded of a short story I wrote called “The Letters of Heaven.” [It appears in the Fall 1997 issue of The Georgia Review. —Ed.] Historical fiction. Martín de Porres and Rosa de Lima, in that story, were more than seventeenth-century Catholic saints. They were two people participating in the ecstatic experience of the Divine in all they did. I was attracted to that. My understanding of God at that time was “Look elsewhere. Look for manifestations of the Divine that occur outside your reference points.” The sign of the Divine for me was any experience of profound love. If you experience that, it’s a sign of the presence of God.

I still think that way. If somebody is on the paths called Hindu or Catholic or Jewish and moving toward that depth of love, I’m thrilled to see it. I was in Lebanon once, in Beirut. I asked a man if I could go to “ceremony” with him. For the first time I went to a mosque. I felt filled with love there. I felt companionship toward all the people I was with. I felt the presence of the Divine because of the serious and humble effort at prayer: to forget all the intrusions, the distractions, and concentrate on the Divine. I thought to myself, I want to be here. It’s incidental that it was a mosque.

I wish I knew better how to communicate with people who say, “You’ve lost your faith.” I have not lost my faith. My faith has grown. [Laughs.] You know, when I say “adults” and think of what Aboriginal and Native American and Eskimo people have taught me about what it means to be a grown-up, I want that transitional experience to occur for everyone. Things like nationalism or fanatic devotion to a particular interpretation of a sacred text bring nothing but pain and criminal behavior: murder, slander, ethnic war. If only we could just exist on this plane where everybody understood that the Divine is incomprehensible but sometimes apparent. And when it is apparent, it deserves your full attention. If you’re really advanced, you know you’re in the presence of the Divine even when you’re doing the dishes. So my answer to the trouble is: Make your acquaintance with God, in whatever form that takes for you. It’s just good relations with the Divine that gets you through the wickedest trouble (emhasis added).

The "scandal" of Christianity is the assertion that the "Divine is incomprehensible but sometimes apparent." The scandal is in the assertion that there is a "divinity," however incomprehensible, that does appear in a world that we usually believe is a world that we ourselves create. Any such assertion (an assertion of the importance of the "I") is a profound misapprehension. We are "creatures," not the Creator, and we are kin to all that lives in the World of Nature. We are dependent on that mysterious divinity that brought us to life, and that does appear, "sometimes."

As Shakespeare wrote, there is "a divinity that shapes our ends, rough hew them as we will." To accept this is to acknowledge our place in a world that God created.


The Christmas "story," like all true and great stories, seeks to explain something that is, in fact, incomprehensible and unexplainable. Why are we here? We truly don't know. But it is not our own doing.

That we do know.

Luke 2:13-14 King James Version
And suddenly there was with the angel a multitude of the heavenly host praising God, and saying, Glory to God in the highest, and on earth peace, good will toward men.