#352 / Getting Guidance From The Grocery Store 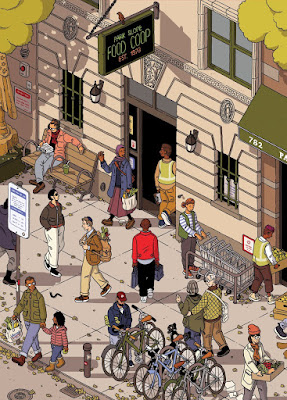 Online, the article is titled, "The Grocery Store Where Produce Meets Politics." In the hard copy version, The New Yorker calls this article, "Bounty Hunters." The article is in the November 25, 2019, edition of the magazine, which has a weird picture of a Thanksgiving Turkey on the cover: 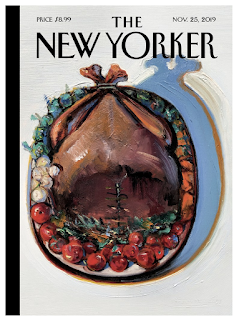 I have written in this blog about "Sports As Metaphor." This article, by Alexandra Schwartz, seems to posit "Grocery As Metaphor." The Park Slope Food Co-op, which is the subject of The New Yorker article, has 17,000+ working members. That means that they actually work in the store. According to Schwartz (and I am definitely prepared to believe her) the Park Slope Food Co-op is "the biggest food cooperative run on member labor in the country, and, most likely, the world."

One comment in the article that I particularly enjoyed was from a former member, who said that the Food Co-op was "a user-friendly way of experiencing the pitfalls of communism." Drive it before you buy, I guess! This analysis did come from a "former" member.

A more positive statement about the food co-op follows. This is Joe Holtz speaking. He is identified as the "keeper of the Co-op's institutional memory," and talks about how the Co-op got started:

"We had a good, robust discussion of all the different models of co-ops that we knew and what we thought we should do and what problems we were trying to address,” Holtz said. “But also, if I could jump around for a minute, the bigger picture is ‘Why do we want to start a co-op?’ For me, I felt that the whole idea of American culture being all about individual success—not that I didn’t think that individual success was legitimate, but I thought that our society was too focussed on it, and not focussed enough on community success, and community institutions.”

This final observation rings true to me. Individual success is, certainly, a "legitimate" goal, but are we, in the end, "focused enough on community success, and community institutions?"

I tend to think not.

Looks like there is a grocery store, in Brooklyn, that can give us some guidance!