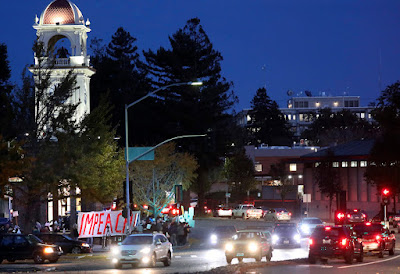 President Trump is a crude, narcissistic liar, who has used his position in office to advance his personal fortunes and his family business. Doing those things, along with efforts to promote notions of his personal greatness, and to support environmental and economic policies that benefit the corporations and the ultra-rich, appear to be his main objectives. Given all that, it seems obvious, to most of the people with whom I talk, that the president should have been impeached (as he now has been), and that he should be removed from office after a trial in the Senate.

Of course, the nature of the most compelling arguments against the president may also be seen as a sign of the weakness of the case for his removal from office by way of impeachment. Donald J. Trump is a political and policy disaster zone posing as a president. But this means that the strongest arguments against him are really "political" ones. "Political" arguments are supposed to be settled at the ballot box, not by impeachment. In his six-page letter to Nancy Pelosi, sent prior to the impeachment vote, this is exactly what the president argued.

When I posted the president's letter on my Facebook page, indicating that I thought the letter was "worth evaluating for its persuasiveness," none of those who then commented on the letter thought it was "persuasive" in any way.

I tend to think that the president's letter, sent on White House stationery, did make his strongest case against impeachment. What is the president's best anti-impeachment argument? His best argument is that the whole process has been totally "political" from the outset, with calls for his impeachment having begun on the president's first day in office. The president's best argument is that the entire process demonstrates a fixed desire to impeach, based on whatever excuse can be dredged up. This leads directly to the conclusion that the specific offenses cited in the Articles of Impeachment have thus lost any claim to legitimacy. This argument may well not be "persuasive" to my Facebook friends, or to most of those living in Santa Cruz County, but it's a pretty good argument for lots of other people.

I think it's fair to say that most of those who have strongly supported the impeachment of the president do not believe that the Senate will actually vote to remove the president from office. If that assessment proves to be accurate, it will be accurate because the argument that "this is just a Democratic Party political hatchet job" is going to be persuasive to lots of Senators (admittedly, probably all of them members of the Republican Party). Let it be said, though, that if the constituents of those Republican Senators were outraged and aggrieved at the president's conduct, and supported his removal from office, a number of Senators who are predicted to vote against the president might, in fact, vote to uphold the Articles of Impeachment, and to remove him from the presidency.

The president's argument, in his letter to Nancy Pelosi, will have succeded in its objectives, and will have proved itself persuasive, if Republican Party voters, throughout the nation, end up concluding that the impeachment process is just more "politics." That claim is the president's best defense against impeachment and removal.

My personal thoughts about impeachment leave me feeling that our current situation is very problematic. The charges advanced against the president, when they go to the Senate, will be portrayed and considered by many not as a solemn use of the Constitutional process of impeachment, but as just one more evidence that our nation is horribly divided, on "political" lines. The process, as it comes to a conclusion in the Senate, will confirm to many (in both parties) that everything about our government is "political," and that "politics" is the only thing that is going on in this entire impeachment adventure. Since "politics" does not have a very good reputation among the public, the impeachment process is likely to weaken, not strengthen, civic engagement and a commitment to the kind of political involvement that would allow us to face and surmount the considerable dangers ahead, including the existential challenge of global warming.

With those thoughts as a preface, I am mostly writing this blog post to draw readers' attention to a recent (and rather long) article that appeared in CounterPunch.

Titled, "Impeachment: What Lies Beneath," the article begins with an analysis something like the one I have just provided here - though the CounterPunch version is, in my view, quite a bit more snarky.

CounterPunch and I are in agreement that impeachment, in its current form, is highly problematic, and that the current proceedings are unlikely to remove the president from office. I am concerned that the process will drive people away from the kind of political engagement that I think is vitally important. The author of the CounterPunch article, Jim Kavanagh, puts another spin on the situation. He suggests that proceeding with the impeachment does not make political sense for the Democratic Party, and so deduces that it is at least possible, if not actually "likely," that there is something else going on - something hidden "beneath" what we know about the impeachment from reading about it in the press, and from watching the hearings and debate on television.

Kavanagh admits that he is "speculating," but his speculations have a certain logic to them if you are at all suspicious of the government. He says, for instance, that a majority in the Senate may well vote to impeach the president, because the powers that really run the country, called out by President Eisenhower as the "military-industrial complex," do not find President Trump a reliable ally. Those in the government who wish to continue the United States' far-flung military adventurism are anticipating, says Kavanagh, the near-term need to use United States' military forces in the Middle East, as a war begins next spring between Israel and Iran, a war that will (the article predicts) quite possibly involve the use of nuclear weapons.

It is, again, all just "speculation," and maybe Kavanagh is a complete "kook," but I am hoping that some of the readers of this blog posting will take time to read that CounterPunch article, and to consider whether he might be right that "something is happening here," and that we "don't know what it is."

If that were true, it would behoove us all to start paying very close attention, because if Kavanagh's speculations have any reality at all, what is happening here is very, very scary.