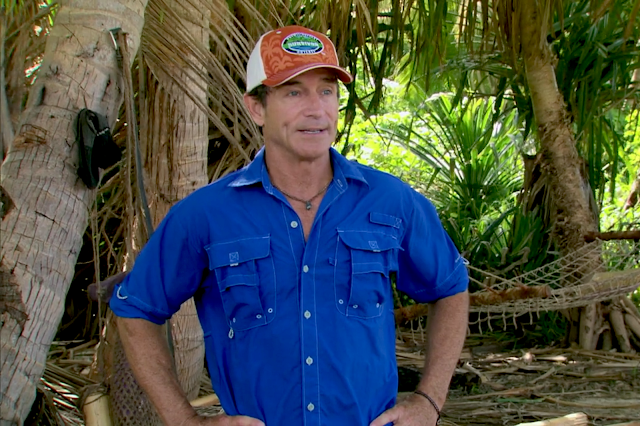 I am not a big "Survivor" fan, though I have been exposed to the show on occasion. For anyone not in the know, Survivor is an acclaimed television series on CBS. Jeff Probst, its host, is pictured above. "Survivor" premiered in May 2000, so it has been around a long time. Season 39 has just ended, and this last season has been very controversial. For the first time ever, a player was removed from the game - by the management.

I found out about the controversy from a recent article in The New York Times. I recommend the article to you. Click the link to the title, below, and see if you can slip by the paper's paywall. The Times' article is headlined, "How ‘Survivor’ Failed Its #MeToo Test."

Until, that is, he was suddenly terminated by the management, maybe because he got inappropriately touchy with one of the crew members. That's the rumor that was reported in The Times.

At any rate, I enjoyed reading The Times' analysis, which pointed out that CBS has the reputation for condoning and protecting sexual harassment, even in very extreme cases. Here are the final paragraphs in the article, with some highlighted language that particularly caught my attention:

“Survivor” loves metaphors — “On this island, fire represents life” and all that. It sometimes seems to view itself as a metaphor for, and thus separate from, the real world. Players regularly distinguish between “the game” and “real life.” Its gameplay requires a kind of moral compartmentalization, which is relatively innocuous when it involves, say, lying to someone about your vote at a tribal council.

For the sake of its cast and crew — as well as the message it’s sending to millions of men, women and kids in its audience — “Survivor” needs to start acting like that. It needs to confront, in its regular post-finale special, how it failed, why it was wrong and what it’s going to change.

“Survivor” may construct its own reality for entertainment. But this isn’t a game (emphasis added).

The Times' article appeared in a "Critic's Notebook" column by James Poniewozik, so it includes "opinion," as well as "fact." Assuming that the facts are as presented, I think Poniewozik is correct in his opinion that CBS, and "Survivor," absolutely failed its #MeToo Test. However, I want to suggest that Poniewozik and The Times failed to carry through their analysis to what might have been a more complete and robust evaluation of the show.

The sexual harassment that occurred was "real life," not a "fantasy," and should have been treated, immediately, like the real offense it was. That's the point of the article. Granted.

But is it really true that lying, the very basis of the entire game, should be let off the hook? Should we agree that we can "compartmentalize" lying, and say that it's just fine to lie, since "Survivor" is not actually about "Reality," but is just a game? The argument seems to be that "Survivor" needs to acknowledge "Reality" in the case of sexual harassment, but that we don't need to think about "Reality" when it comes to lying.

Our president has announced that it is perfectly acceptable for him to grab women by their private parts, and that lying is just the same sort of thing, both of these being minor indiscretions, if you can even count them as indiscretions, at all. Most of my friends are appalled by the president's behavior, and by his justifications. He, too, however, is a "Reality TV" personality, and he has obviously learned that "lying" is perfectly acceptable.

That is not my view. "Lying" isn't acceptable, ever, and a show that says that the way to win a million dollars is by being the best liar in the group of liars that make up the "tribe" is not helping our society to live long and prosper.

If you need to "lie to survive" you ought to get off the show. But that's not the lesson that "Survivor" aims to teach. It teaches the opposite.