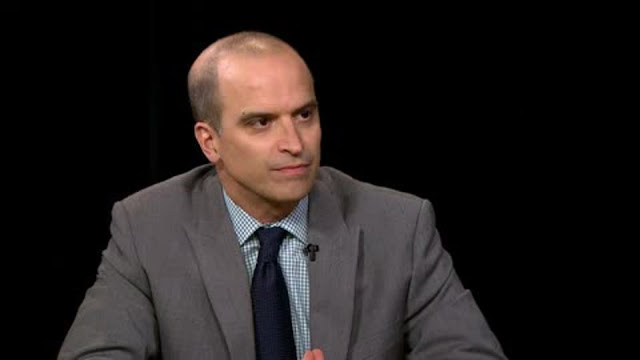 Your professor for today is David Leonhardt, Opinion Columnist for The New York Times. Leonhardt is pictured above as he appeared on the Charlie Rose show in 2017. This was before Rose was terminated for having, apparently, engaged in multiple episodes sexual harassment. If you click this link, you will find Leonhardt talking about then-Attorney General Jeff Sessions.

Much more recently, Leonhardt has provided advice to Democratic Members of Congress, as they consider the possible impeachment of President Donald Trump. An article by Leonhardt, which appeared in his December 6, 2019, newsletter, was titled, "Psych 101, Impeachment Edition." So here's professor Leonhardt on how psychological research might assist the Democrats with what they are preparing to do by way of impeachment:

A raft of academic research has found that a simple recitation of facts often fails to change people’s minds. A more promising approach can be to use a trusted intermediary. That is, the who of an argument can matter more than the what and the why.

In politics, as the political scientist Brendan Nyhan has written, avoiding “partisan and ideological cues” is particularly important. It’s extremely hard to persuade Republicans if the people trying to do the persuading are Democrats.

And yet House Democrats didn’t call a single conservative legal scholar as a witness yesterday to make the case for impeachment.


There is some validity to Leonhardt's point, not only as a matter of politics, but as a matter of rhetorical or argumentative technique. Having a conservative legal scholar present evidence against the president would have made it harder for those who support the president, both inside and outside of Congress, to maintain that the current impeachment proceedings have no substantial basis, and are nothing more than a partisan attack and a political "witch hunt." It may not be too late to try something along the lines of what Leonhardt recommends. Or even for the Democrats to make a "concession" or two.

Students who take the Legal Studies Capstone Thesis class I teach learn that making a "concession" of some kind is a way to strengthen, not weaken, your argument. In a way, that seems counterintuitive; however, someone advancing an argument can strenthen that person's position by agreeing that there are valid objections, and that there are some other points of view that have some validity.

Even granted that the Democrats have been hungering after impeachment long before any whistle ever blew (consider presidential candidate Tom Steyer's ill-advised "Need to Impeach" campaign as an example), and even taking into account that how a president conducts his dealings with foreign heads of state must really depend, mostly, on the president's own style and choice, what is happening today is not simply a partisan attack.

Because impeachment is justified, those proposing the impeachment should make every concession that they possibly can.

The better to make the impeachment stick.