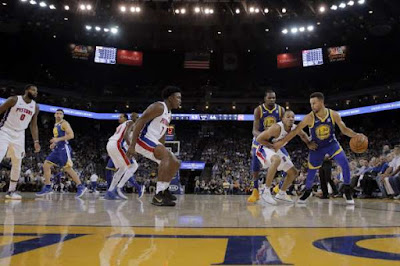 I have written, recently, about the Golden State Warriors and The Trophy Wife Syndrome. I commented, in my blog posting last Sunday, about how a social phenomenon not generally associated with basketball (The Trophy Wife Syndrome) might actually have something to say about what is going on with a formerly dominant basketball team, the Golden State Warriors. My suggestion that The Trophy Wife Syndrome might have something to do with a hypothesized "curse" that the Oracle Arena has placed upon the Warriors is to advance the idea than an overreaching ambition can have bad effects. I am not the only one to have had such thoughts.

I am, somewhat, bemused by my own speculations and interest in this matter, because I have never, until five years ago, followed any sports team, ever, in any way. I read five newspapers every morning, but I never used to read the sports pages. I simply put them aside, along with any advertising supplement that may have come along with the news. "Fifty years Without Sports" would have been a good title for my autobiography. All that changed five years ago, when I just happened, sort of by chance, to watch the Warriors play. My captivation by the Warriors (or perhaps "former captivation" is more accurate), has always struck me as a little bit puzzling. Now, as I sense that I may be falling out of love with the Warriors, I am seeking to address the question, "What do the Warriors mean to me?" As I ponder this, I do believe I know why I fell in love so strongly, and why I became what the Warriors call an "Authentic Fan."

This is not late-breaking news, but it is common to use sports as a stand in for something else - for issues that concern us in "real life." National pride is associated with Olympic Gold Medals, for instance. When United States' athletes win, in the Olympics or in Women's Soccer, we all feel that our national allegiences are reinforced.

In other words, sports often serve as a "metaphor" for something else.

In my case, my infatuation with the Warriors was a metaphor for something I care about very deeply, the state of our national commitment to our "community" life together. Committing to a larger community, politically and otherwise, is the proper way to fulfill our "individual" efforts to succeed and flourish. I deeply believe this. We are all "individuals," of course, and everything that exists, and particularly every "new" thing, begins in the mind and spirit of an individual person. But we are not only a collection of individuals. We are, truly, part of a greater whole, and we cannot survive or flourish if we seek to do so individually. We are "together through life."

"Warriors ball" was a style of play that recognized that it was the "team" that ultimately determined whether or not games would be won, and whether success would come. "Unselfish" was what the commentators said. "Ball movement," not individual scoring efforts, is what led to the Warriors' greatness. I realize, now, that I saw the Warriors, and the way they played basketball, as a metaphor for the nation as a whole.

If the "curse" of the Oracle Arena ends up in elevating individualism over "the team," then I can save myself a lot of time that might otherwise be spent in evening television watching! But I am distressed, also, on that "metaphorical" level.  The decision of the team's owners to discard Oakland for the glitter of the brand new Chase Center is the kind of decision that reflects a commitment to "individual" advancement and profit over a long term commitment to others. And that's what the Trophy Wife Syndrome symbolizes, too, at least to me.

Making "deals," and finding a way for the team owners to be able to "buy" individual stars is what I have been reading about in the sports pages, where the Warriors are concerned. I am not enamored by all that talk. I am still thinking about "Warriors ball."