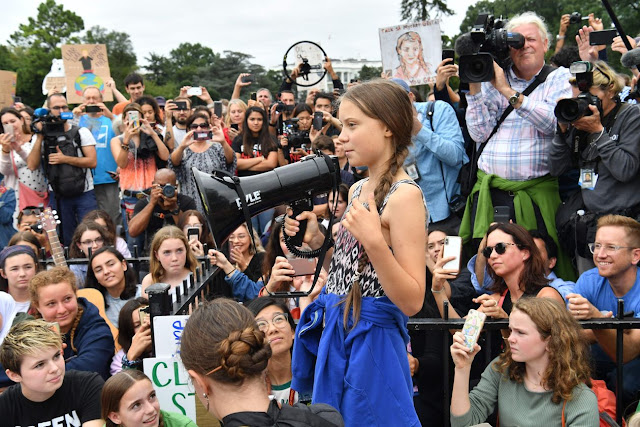 Here is a picture of Greta Thunberg, speaking to a rally in front of the White House. The picture comes from a column that appeared in the October 5-6 edition of The Wall Street Journal. The column was titled, "Greta Thunberg Has the Climate Alarmists’ Number."

The main point of the column, and I don't disagree, is that Greta's work to change national policies on global warming have revealed a lack of genuine seriousness among those in the activist and political community who have been outspoken in urging action to combat global warming and climate change:

Ms. Thunberg ... is aware—and has the bad manners to say so—that the vast majority of wealthy transnationals who intone rote demands that governments “take action” on climate change don’t actually believe what they’re saying. At the U.N., Ms. Thunberg wasn’t speaking to rubes and oilmen and climate “deniers.” She was speaking to the swarms of diplomatic elite who had earlier disembarked from jumbo jets and descended on Midtown Manhattan’s bars, restaurants and five-star hotels and clogged its streets with phalanxes of giant sport-utility vehicles. Ms. Thunberg appears to suspect—rightly—that these people don’t think we’re headed for doomsday. They enjoy the moral uplift afforded by their fashionable views; otherwise they’re along for the ride.

The author of the column, Barton Swaim, uses the word "hypocrisy" to label the behavior he says that Thunberg is revealing:

Ms. Thunberg grasps that if today’s climate leaders believed what they claim to believe, they would use their power to impose drastic reductions to greenhouse emissions, whatever other nations might do. They would also, if their convictions were genuine, engage in terrible and revolutionary deeds for the salvation of humanity: intimidation, brutality, sabotage. Instead they are content to trumpet the right opinions and otherwise persist in their ordinary habits of consumption as though none of it really mattered. Greta Thunberg has a point. How dare they?

I am not so sure I completely agree with this analysis. "Hypocrisy" seems to indicate, as Merriam-Webster defines it, an active intent to deceive: "a feigning to be what one is not or to believe what one does not : behavior that contradicts what one claims to believe or feel."

I would like to give the benefit of the doubt to those who are speaking out about the importance of taking immediate action on global warming. While we can call it "hypocrisy" that various people who are "saying" things about how we need to take effective and immediate action on global warming aren't making the kind of immediate and effective changes in their own behavior that should go along with the analysis, I think that what may be most at work is simply a failure of imagination. What we face - all of us, everywhere on this planet - is profoundly "serious," and we are overwhelmed, I think, by the scale of the disaster. It should not really be unexpected that we have not yet been able to get our wits about us, to figure out practical actions (in our own lives, and generally) that can properly respond to our analysis.

We can say, of course, that it is "hypocrisy" to be talking about global warming and climate change, and saying they are "serious," even before we have taken our automobiles out of commission and have determined never again to travel by airplane. But I'm not sure that "hypocrisy" is the right word. At least, that's my effort to be charitable, charity being the greatest of the virtues!

What I think we need to focus on - instead of trying to score points off others - is just how "serious" things really are. In this regard, let me present a statement in Swaim's column that I think has revealed his own failure to respond properly to the planetary crisis in which we are all involved, and  in which we are all implicated:

[Thunberg] gets praise for her bold preaching on climate change, which the right can’t criticize without appearing boorish—great. But a political movement spoken for by a teenager can’t be taken altogether seriously (emphasis added).

Really? I mean, seriously? Can you actually mean what you just said? Are you honestly claiming, Barton Swaim, that we are not to "take seriously" a political truth if it is "spoken for by a teenager?"

That judgment is mistaken!

The truth, however we come to know it, must always be taken seriously. That is the first rule of moral discernment. As I said in my earlier column on Thunberg's efforts: