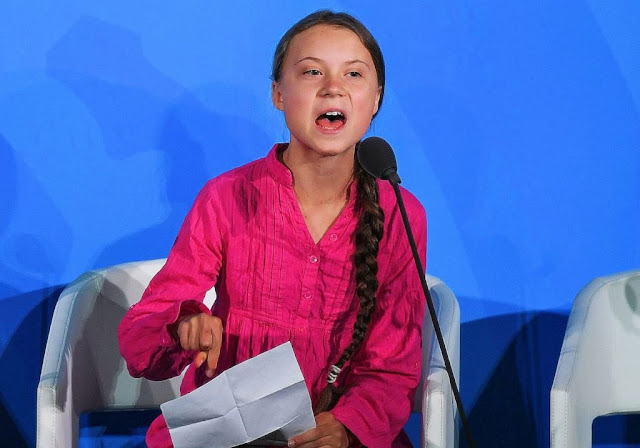 In late September, Thunberg appeared before the United Nations, and spoke forcefully about the need for world leaders to take immediate and concrete actions to combat human-caused global warming. The picture above, betraying her anger at the lack of serious action by world governments, was taken during one of her appearances. The picture immediately below, showing a much more "sunny" version of Greta (the "nice" Greta), comes from the Wikipedia profile linked above. 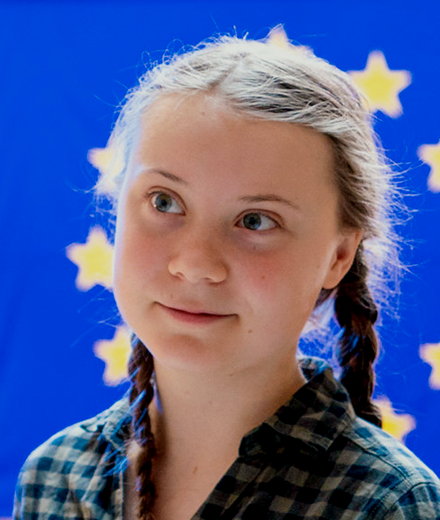 As it turns out, some people did not like the version of Greta Thunberg that showed up at the United Nations. What she said (among other things) was, in fact, pretty "angry." Here is a link to a full transcript of her remarks, and here is how she began those remarks:

This is all wrong. I shouldn't be up here. I should be back in school on the other side of the ocean. Yet you all come to us young people for hope. How dare you!

You have stolen my dreams and my childhood with your empty words. And yet I'm one of the lucky ones. People are suffering. People are dying. Entire ecosystems are collapsing. We are in the beginning of a mass extinction, and all you can talk about is money and fairy tales of eternal economic growth. How dare you!

So who got offended by Thunberg's speech to the United Nations, which can be characterized as the kind of "straight talk" that was the specialty of former United States Senator John McCain? Well, Jake Novak and CNBC got offended.

According to Novak, Greta's most recent pronouncements on global warming seek to shift responsibility from individuals onto to governments and big corporations. This assignment of responsibility (although right on target, in the real world) is highly problematic politically, according to Novak. We all know who runs the world, right? Novak thinks that "Greta Thunberg’s rise could backfire on environmentalists."

David Harsanyi, Senior Editor at The Federalist, was even more outraged than Novak by Thunberg's remarks at the United Nations. His article, titled "The Tragedy Of Greta Thunberg," basically calls her ungrateful, and denounces her for not appreciating how great she's had it in a world that is the product of capitalist productivity:

Sixteen-year-old Swedish climate change activist Greta Thunberg lives in the healthiest, wealthiest, safest, and most peaceful era humans have ever known. She is one of the luckiest people ever to have lived.

In a just world, Thunberg would be at the United Nations thanking capitalist countries for bequeathing her this remarkable inheritance. Instead, she, like millions of other indoctrinated kids her age, act as if they live in a uniquely broken world on the precipice of disaster.

What can I say about this? How even to begin to react to this diatribe? How about that "straight talk" stuff?

Harsanyi objects to Thunberg, "acting like millions of indoctrinated kids her age," and acting like "they live in a ... broken world on the precipice of disaster (emphasis added)."

Instead of calling Greta "ungrateful" for drawing our attention to our actual situation - and doing so in a strong and forceful way - let's thank Greta, and be grateful to her, for trying to get us all to stop denying the facts and to start doing something about them.

Just as a kind of footnote, David, to speak to one of your concerns, the sooner we begin actually to make progress in ending our use of fossil fuels, and the sooner we start taking effective action to reduce human-caused global warming, the easier it will be to avoid the kind of "authoritarian" approaches you say you are worried about.

In other words (my final thought):