#305 / A Little Complaint About A Turn Of Phrase 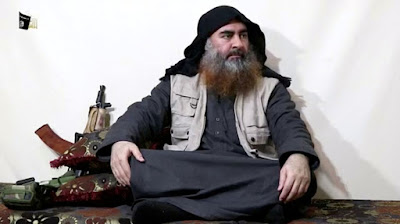 Pictured above is Abu Bakr al-Baghdadi. He was killed by United States military forces on Sunday, October 27, 2019. Here is what Robin Wright says about Baghdadi in a New Yorker article, "ISIS’s Leader, Abu Bakr al-Baghdadi—the World’s Most Wanted Man—Is Dead":

Since 2014, Baghdadi had been the world’s most wanted terrorist; he long had a U.S. bounty—of twenty-five million dollars—on his head. ... His real name was Ibrahim Awad al-Samarrai. He was born in Tobchi, Iraq, near Samarra, to a devout family that followed the ultraconservative Salafi school of Sunni Islam. He joined the resistance against U.S. troops after the invasion, in 2003. He was arrested by American forces in 2004 and held in Camp Bucca, a prison that became infamous as a breeding ground for extremism. At the time, Baghdadi was deemed a minor player and released after a few months. He later went on to assume the leadership of Al Qaeda in Iraq, after U.S.-led air strikes killed its leader, Abu Musab al-Zarqawi, in 2006. The Islamic State in Iraq, as it later came to be known, was forced underground. It had only a few hundred followers.

President Trump held a special news conference on Sunday, to inform the world of Baghadi's death. Among his other remarks, the president said that Baghadi "died like a dog. He died like a coward...." The president, however, began his statement as follows:

Last night, the United States brought the world's No. 1 terrorist leader to justice.

It seems that presidents of both parties like to brag about killing terrorist leaders. President Barack Obama celebrated the death of Osama bin Laden, who was also killed by American military personnel. You can click here for a transcript of President Obama's statement, which was made shortly after bin Laden's death. President Obama, like President Trump, used the phrase "brought to justice," albeit President Obama did not use it in the first line of his statement.

I am posting this note to protest claims that Baghadi and bin Laden were "brought to justice."

Neither Baghadi nor Osama bin-Laden, both killed by American soldiers, were actually "brought to justice." Both bin-Laden and Baghadi were killed in actions that were and are part of a war - albeit it is an unofficial and undeclared one. War and Justice have little, if anything, in common. Justice (as we understand it in the United States) includes due process for the accused. It includes due process for the guilty. Due process includes the right to confront one's accusers and to bring forth arguments in one's own defense.

People hunted down and killed "like dogs" (to employ President Trump's phrase) have not received "justice." They have simply been "killed."

Actually, this is an important point. If the President of the United States can order people killed because he (or she) is convinced, on evidence never fully disclosed to the public, that the person should die, then who can tell when that list might include you; or me; or anyone else?

Both President Obama and President Trump assert that presidents have the right to kill "terrorists." And they know who they are, of course!

But let's not call that "justice."

That's not what it is!