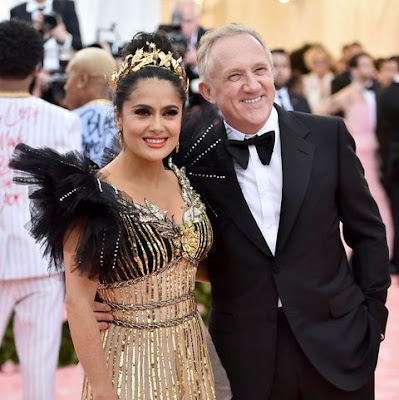 Above are pictured film actress Salma Hayek and her husband, François-Henri Pinault. Pinault is a billionaire businessman and philanthropist. I guess he supports the Metropolitan Museum of Art. The picture above, showing Hayek and Pinault, was taken at a 2019 Met Gala. A very similar photo was recently posted to the online magazine Aeon, accompanying an article titled, "Let us now stop praising famous men (and women)."

That is an idea that I endorse. I particularly liked the article's objection to the "smog of praise" that so often surrounds the extremely rich. Read the article on why excessive praise for the wealthy (who mobilize their outsize fortunes to do "good works") helps to undermine any genuine democracy.

If we want to foster a truly democratic society – a society in which we treat each other as equals – we must rein in ... excessive praise and the perverse incentives that encourage it. We should aim for the opposite extreme, toward withholding praise and being more circumspect about the wealthy and powerful, to restore balance. As Justice Louis Brandeis, who witnessed our previous Gilded Age, might have said: "We may have democracy, or we may have praise showered on the heads of a few, but we can’t have both."

"Treating each others as equals" is the key to democratic self-government. It is easy to forget our fundamental equality, as citizens, in the midst of so many celebrations of the superior situation of the rich.

Pollution kills - and not just the kind that comes out of the tailpipes of gasoline-powered vehicles.

Watch out for that "smog of praise."