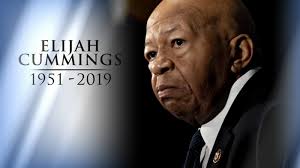 Elijah Cummings, pictured above, died on October 17, 2019, at the age of sixty-eight. He was a civil rights advocate who served in the United States House of Representatives for twenty-three years, representing Maryland's 7th Congressional District, which includes just over half of the city of Baltimore.

While President Trump didn't attend Cummings' memorial service, it was very much a bipartisan celebration of a life well-lived in American politics. Probably, to be honest, this moment of bipartisan good feeling was at least partly owing to the president's non-attendance. In reflecting on Cummings' life and work, and in reporting on Cummings' memorial service, The Wall Street Journal's conservative columnist, Peggy Noonan, waxed nostalgic for a politics that can "live and let live."

What was poignant was how much the speakers enjoyed being their best selves. Congress knows how hapless it looks, how riven by partisanship and skins-vs.-shirts dumbness. For many of them it takes the tang out of things. They know it lowers their standing in America. They grieve it. It embarrasses them. They’d like to be part of something that works, something respected.

It wouldn’t be lost on the brighter of them that they were enacting in the Cummings ceremony a unity and respect, a shared purpose, that they wish they could sustain but are unable to.

They believe they are forced into their partisan positions by several things, among them that America is badly divided and the politically active on both sides, in their mutual loathing, pull toward the extremes.

As I watched the ceremony I thought of a dinner two weeks ago with a close friend. It was just the two of us and we found ourselves going deep about how we feel about everything. She is a spirited lefty, a longtime Democratic donor, I am a righty, a conservative as I define it, but neither of us has ever cared much about that because the essence of friendship is . . . essence. Who you are, which fairly enough includes politics but is not limited to politics. We’ve had 30 years of teasing and occasional sparring but this night we went to the thoughts behind our views. She asked me how I see my own political views; am I more lefty than I was? I found myself saying something I’d never said, that all my political thinking comes down to this: I am for whatever will hold America together, full stop. I see it breaking in a million pieces and my every political impulse has to do with wanting it to hold together, to endure, to go forward in history and the world. If that means compromise, fine. She thought about this, nodded and said softly that that makes complete sense right now. “That’s a program.”

But don’t most of us kind of think like this? Even if we haven’t articulated it or even noticed it’s what we think. But isn’t it the right primary intention?

A deep impediment is the air of political maximalism that careless people who never know the implications of things encourage. Years ago Rep. Bella Abzug of New York would point out that her father was a butcher, who owned the Live and Let Live Meat Market. I always liked that. Nobody says that phrase anymore, live and let live, but long ago everybody did. Now it’s part of what’s missing—a sense of give (emphasis added).

I don't usually get my political advice from conservative columnists, but I have to agree with Peggy Noonan about "live and let live." That's a big part of what is missing in our contemporary politics, a "sense of give."

Of course, I associate that "live and let live" phrase not with Noonan, or with Bella Abzug, may her name be blessed, but with a song that makes a lot of sense at a memorial service. They could have played it quite properly, at the ceremony saluting Elijah Cummings:

Well it's all right, even if you're old and grey

Well it's all right, you still got something to say

Well it's all right, remember to live and let live

Well it's all right, the best you can do is forgive