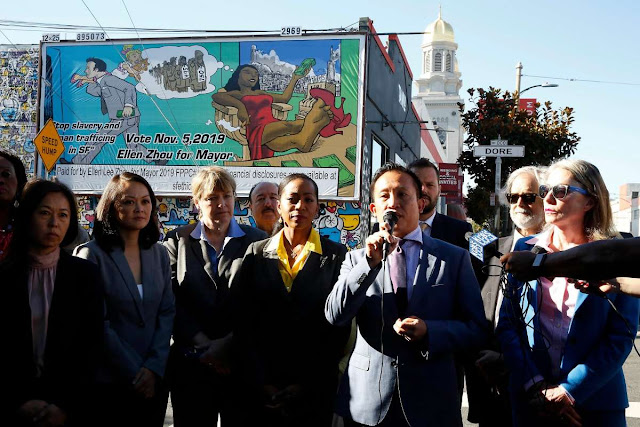 London Breed is the Mayor of San Francisco. She is running for reelection, and one of her opponents, Ellen Zhou, has recently paid for a billboard advertisement, shown in the background. That's supposed to be the Mayor, off to the right, dressed in red and "kicking back," and relaxing with lots of campaign cash in hand.

The people in the foreground, including a lot of elected officials, are there to denounce the billboard, which they claim is "blatantly racist." If you would like to read about the controversy, and if you can penetrate the paywall maintained by the San Francisco Chronicle, a click right here will take you to an article published in the Chronicle on Tuesday, October 22, 2019.

I am not sure I would call the billboard "racist," but some people definitely feel that way about it. It certainly does portray the Mayor in an unflattering light. At any rate, what caught my attention in the article wasn't the billboard so much, but a comment made by a member of the San Francisco Board of Supervisors:

"What we're seeing is a trickle-down hatred coming from the White House," said Supervisor Matt Haney, who represents District Six, where the billboard was erected.


I think that comment is right on target. Trickle down hatred is on display every day, at almost every level of our political life. One way to stop the hatred from trickling down is simply to ignore insults, and outrages we experience, instead of republishing and amplifying them, which does have the effect of simply passing the hatred on!