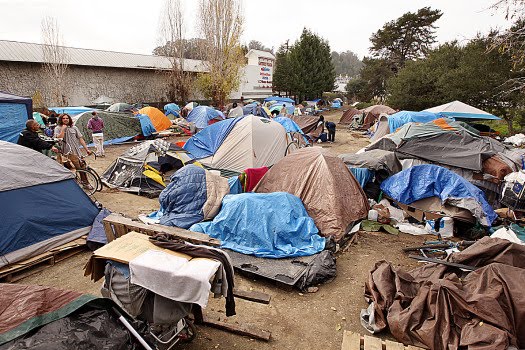 The picture above is of the so-called "Ross Camp," an unauthorized homeless encampment (now closed) named because of its adjacency to the Ross "Dress For Less" Store in the Gateway Plaza Shopping Center in Santa Cruz, California.

The existence of this homeless encampment was controversial. The City's decision to close the encampment, just before Christmas, in 2018, was also controversial. Before it did close the camp, the City went to federal court, in San Jose, to make sure that the camp closure (which the city said was necessary for public health and safety reasons) didn't violate a recent Ninth Circuit Court of Appeals decision, Martin v. City of Boise, which does apply throughout the State of California.

Santa Cruz, like many other California cities, has a difficult problem with homelessness. Communities are trying to figure out what best to do. There aren't, as the Santa Cruz experience demonstrates, any easy answers or good solutions.

The fundamental problems stem from the incredible wealth inequality prevalent in the United States economy, exacerbated in Santa Cruz by the nearby Silicon Valley, whose workers command average salaries far greater than the salaries that most local workers can command. The result, of course, is that rents and home prices in Santa Cruz skyrocket, as local workers, looking for housing, are outbid by workers from "over the hill."

This is what a "market" economy is designed to do, increasing prices to reach the greatest price that the market will bear, given supply and demand. That point, in Santa Cruz, just happens to be a point that is driving ordinary working people in the Santa Cruz County community into tents and vans. The fact that the University of California, Santa Cruz keeps increasing its student population has exacerbated the difficulties.

Increasing the "supply" of market rate housing is not, unfortunately, a solution. The only  increase in supply that will help local workers is a new supply of price-restricted housing, sometimes called "inclusionary housing," with prices set not by the "market," but by governmental regulations that keep such prices within a range that will allow them to be rented or purchased by persons with average and below average incomes in the community.

Given the desirability of living in Santa Cruz, hundreds of thousands, or even millions of workers from across the hill, for whom Santa Cruz prices are lower than Silicon Valley housing prices, completely overwhelm the ability of Santa Cruz workers to compete in the private housing market. In Santa Cruz, the construction of more market rate housing doesn't equal more "affordable" housing. Only by increasing the supply of price-restricted housing can the community deal with its housing crisis. Unfortunately, though, not only have past City Councils reduced the required amount of "inclusionary," price-restricted housing that developers must provide, the United States Supreme Court is now going to decide whether it is even constitutional for a local government to require that there be any price-restricted housing at all. Things do not look good.

Given all this, it is no wonder that efforts to deal with increasing numbers of homeless persons is a major local issue. However, Santa Cruz is not the only community affected. Far from it.

In Sacramento, California, for instance, similar conditions pertain. Here is a picture of a homeless camp in Sacramento:

The City of Sacramento, according to the recent news article from which the picture was taken, is asking the United States Supreme Court to reverse Martin v. City of Boise. Sacramento contends that this Appellate Court decision is "ill-defined and unworkable." According to these Sacramento city officials, the Martin v. City of Boise decision will "derail local and regional efforts to end homelessness ... preventing law enforcement officials from ensuring the public health and safety of communities."

In other words, this Court of Appeals decision is NOT a major problem if local communities decide that an unauthorized homeless camp should be closed.

Let's be clear about the decision. All Martin v. City of Boise says is that "municipalities cannot punish people for sleeping on the streets if there are no available shelter beds," to quote that news article in The Sacramento Bee, which does, accurately, state the court's decision.

Closing homeless camps, in Sacramento or Santa Cruz, may be very controversial. Whether to do that, or not, raises difficult public policy questions, and there aren't any easy answers. But Martin v. City of Boise doesn't stop a city from closing a homeless camp, if the city reasonably determines that there is a public health or safety problem. All that case does is to prevent a city from criminalizing homelessness.

Shame on the City of Sacramento! It is not a "crime" to be homeless, and when people are homeless the failure is almost always not theirs alone. Homelessness is a societal failure, not an individual one. Homelessness is not "criminal." That's what Martin v. City of Boise says. Congratulations to the Ninth Circuit for getting that right!