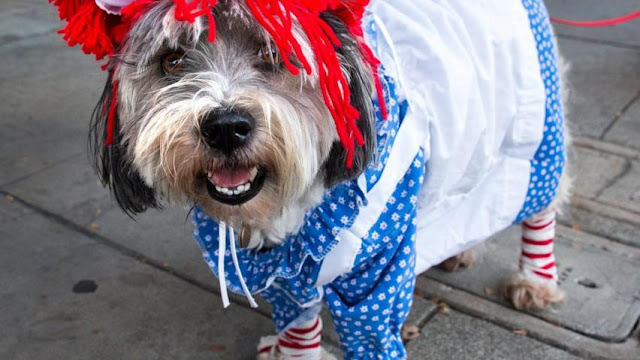 Does that "little-d" in my title stand for "dog?"

I'm just kidding, really, but the illustration above appears in a rotating series of pictures that popped up online when I tried to access a story about "democracy" that ran in the Sunday, October 6, 2019, edition of the Mercury News.

That story is titled "A new VOICE in LOCAL politics," and profiles Brian Jaffe, who describes himself as a "Democracy Advocate. Entrepreneur." Jaffe is the founder of "VOCA," a civic engagement platform that aims to connect citizens with local government. Jaffe says he wants to advance "little-d" democracy. Here is how he explains it, on his LinkedIn page:

I am an ardent believer in the transformative capacity of technology. Now is the time to confront the biggest, most challenging problems in our world. To me, one of these problems is the unequal and inadequate practice of democracy.

In the United States only three in five citizens vote in presidential elections, and only one in five vote in local elections. Around the world we see so-called democratic governments curtailing free speech and outlawing opposition. In short, civic participation is low, and it is getting harder more places than it is getting easier.

At the same time, every other form of information and opinion sharing is proliferating at an unprecedented rate. A viral music video can almost instantly spread globally to hundreds of millions of viewers. Everything you watch, buy, or eat can now be rated, ranked, and compared. Sharing and rating culture and commerce has never been easier, so why can't it be done in the world of civics?

You can get more information on VOCA by reading the story in the Mercury. Here is how VOCA works:

Those who sign up for VOCA, receive a question every week via a text message sent to their phone on any given issue within their city. They can respond with [by texting the numbers] 1-5, signaling how strongly they support or oppose a statement, and can send a comment to defend their stance. The service is free, anonymous and you don’t need to download an app to use it. After gathering the responses, the breakdown of public opinion from hundreds of residents is sent back to participants [and] posted on social media. Then Jaffe or one of his volunteers shares with the city council.

VOCA — which comes from a combination of voice and advocacy — currently operates in Redwood City and San Carlos with plans to expand to San Mateo and at least one more city on the Peninsula this fall.

You can click this link to go to the VOCA website. Of course, unless you live in Redwood City or San Carlos, VOCA isn't going to do you much good right at the present - presuming that you think that the VOCA formula is actually a helpful way to advance "little-d" democracy.

Personally, I don't believe it is. While I don't absolutely condemn the VOCA approach - it is certainly not inherently evil - I think it is way off the mark, if the object is to revive democracy at the local government level.

VOCA seems premised on the idea that "technology" is how "little-d" democracy can be revived. I am not only skeptical. I disagree. What the VOCA program actually does is to provide Mr. Jaffe with a claim that he speaks for the public, as he "shares with a local city council" what his text-based polling reveals. The "poll" is in response to questions posed by Jaffe, so the practical effect is to give Jaffe a greater role in local politics than he would otherwise have. Call me suspicious, but I am always reluctant to believe that high-tech entrepreneurs have the right solution for all our problems.

That fact is this: if we care about "little-d" democracy, which is exactly what makes self-government possible, we are going to have to get engaged ourselves. No computer-based polling system can substitute in. Ordinary community members, not high-tech entrepreneurs, should be defining what issues are important, and framing the debate. Furthermore, personal appearances at local government meetings, personal communication with elected officials, and personal organizing in local communities - it's called "precincting" - is what defines "little-d" democracy.

There is no shortcut to self-government on the Internet. That's my view!