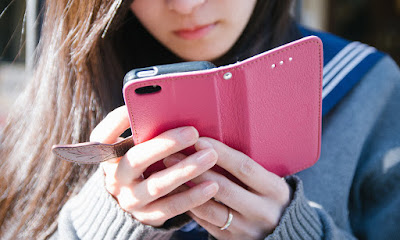 The title of an article I heard about from my email immediately attracted my interest: "What happened when I made my students turn off their phones."

Joelle Renstrom teaches writing and research at Boston University, and I when I saw her title, I immediately went from the email link I received to the full text of her article in Aeon. Since I make students in the classes I teach turn off their phones - and completely forbid all varieties of electronic devices, including phones, laptops, watches and earbuds - I wanted to hear about Renstrom's experience.

As it turned out, the article linked above was not the first article that Renstrom had written on this topic. Her earlier essay, also available on Aeon, was called, "And their eyes glazed over."

Renstrom says that she has "long witnessed and worried about the impacts of technology in the classroom." I have exactly the same worries, but I guess Renstrom is not as much of an authoritarian as I am, because Renstrom has not, generally, forbidden the use of the distracting electronic devices in her classes. She reports that she has wanted students to come to their own conclusions (and then, of course, she hopes, to agree with her):

I constantly struggle to devise effective classroom policies for smartphones. I used to make students sing or dance if their phones interrupted class, and although this led to some memorable moments, it also turned inappropriate tech use into a joke. Given the myriad deleterious effects of phones – addiction, decline of face-to-face socialisation, deskilling, and endless distraction, for starters – I want students to think carefully about their phone habits, rather than to mindlessly follow (or not follow) a rule.

Getting students to "think carefully about their phone habits" (and come to the right conclusion) is certainly a laudable goal. That is a lot better than insisting that they "mindlessly" follow a rule.

Maybe this is one of those "MY BAD" situations - to use an expression that I do not very much like - but I just make my students "follow a rule." I do explain my thinking, and I hope their conformity to the rule isn't "mindless," but it is a rule I insist upon. No electronic devices in my classes (unless you have a verified disability authorization). If students disregard the prohibition, they lose significant points on their grade.

I think Renstrom's article is thought-provoking and worth reading - certainly for teachers, and actually for anyone who is concerned with the impacts of technology on education and on our social, political, and civic life. Here is one of her comments, which might give anyone pause (see the emphasized conclusion):

I asked them whether they’d ever implant their phones in their bodies (as predicted by industry leaders at the Davos World Economic Forum in 2016) and here’s what they said:

Two-thirds of my students would at least consider making their phones part of their bodies, which would mean accepting all the consequences of screens, instant gratification and information-dependency.

The results of this poll of Renstrom's students is one more example, as far as I am concerned, of our human tendency to be more committed to, and to give more priority to, our own human creations (for which we are responsible) than we are are willing to give to the wonder of our actual human existence (which is a gift to us, and in no way our own creation). Let's turn ourselves into machines, at least as much as we can. Two-thirds say that this is what they would prefer (at least if it doesn't cost too much)!

As I reviewed Renstrom's experiences, as presented in her article, I was pleased to see that Renstrom did, on at least one occasion, adopt the approach that I use, and simply forbid the use of smartphones in her classes (though she allowed other electronic devices). The time she did this, as an experiment, she was, somewhat ironically, I thought, implementing a technology devised by a high-tech company called YONDR. You can learn more about YONDR not only from Renstrom's discussion, but by clicking this link, which will take you to a recent article in The Mercury News.

Renstrom's experience is described below:

After reading my Aeon essay ... a representative from a San Francisco startup called YONDR contacted me. YONDR makes special pouches that keep audiences from using their phones at shows. You silence your phone, slide it into the pouch, and lock it at the top. After the performance, or if access is necessary before then, you can unlock the case in the lobby by touching the lock to a metal base, similar to anti-theft tags on clothing. Performers such as Dave Chappelle and Alicia Keys have used YONDR – whose motto is ‘Be here now’ – to curtail unsanctioned recordings and, when they look into the crowd, they see faces, not phones. The approach seems less draconian than forcing people to part with their tech, as separation anxiety defeats the goal of increased engagement.

YONDR sent me pouches to use in class. At the start of the winter semester, I introduced my students to the routine: before each class, they’d silence their phones, get a pouch from the box, and lock their phones in. Before leaving, they’d unlock the case and put it back in the box. During class, I didn’t care if they put the pouches on the desk, in their pockets, or if they clutched them tight. I told them this was an experiment for an eventual article, and that I wanted their honest opinions, which I’d collect via surveys at the beginning and end of the semester.

The honest opinions that Renstrom ultimately collected showed that approximately two-thirds of the students who took part in this experiment believed that "society would benefit from decreased phone use."

Hey! I think I figured that out all on my own!!