#288 / A Quick Thought About Kamala Harris 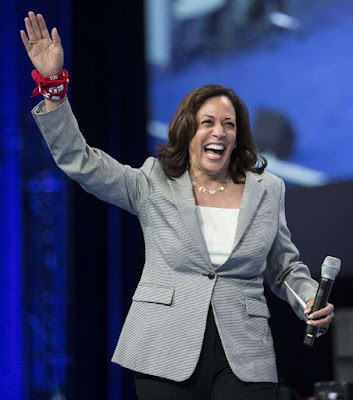 I intend to watch the Democratic Party Primary Debate, scheduled for this evening. Twelve candidates will be on stage, including Kamala Harris, pictured above.

Kamala Harris' first name, by the way, is pronounced "Comma - La,"  not "Come - Alla," which is the way her name tends to keep tripping off my tongue. Whether or not we can properly pronounce her name, though, Californians know Harris pretty well. She is currently representing us in the United States Senate. Previously, she was the California Attorney General.

An article in the October 7, 2019, edition of The New York Times analyzed the Harris campaign, which has been rather lackluster, at least most recently. Under a headline reading (in the hard copy version), "Harris, Seeking Boost, Overhauls Her Strategy," The Times says this:

Gone is the hubris from the start of her candidacy.... (emphasis added)

I think The Times is on to something.

Hubris is never an enchanting attribute in a political candidate, so shifting out of "hubris mode" would be a prudent way for Harris to retool her campaign. The Times' story, however, indicates that Harris may not have quite figured out how to do that, and how to appear more modest and humble than she apparently is, since she obviously has a very high opinion of her own greatness.

One example from the article:

“I stand here as a United States senator, a former attorney general of a state of 40 million people and a top-tier candidate for president of the United States!” [Harris] told striking autoworkers this past week outside a General Motors plant in Reno (emphasis added).

Claiming to be "top-tier," which is a questionable claim in the first place, doesn't reveal a basic, personal modesty. Even if the claim were true, I think it might have been better for Harris to have phrased her pitch to the autoworkers this way:

“I stand here as a United States senator and as a former attorney general of a state of 40 million people. By the way, I am also running for president of the United States, and I am asking for your support!"

According to The Times, Harris has revamped her standard stump speech, and now begins her speech with a lengthy discussion of the president's suspected crimes. Then she says this:

“Let’s have some real talk,” [Ms. Harris said in Reno]. “This is not a new conversation for me. This is a conversation that I’ve heard every time I’ve ran a campaign and — here’s the operative word — won” (emphasis added).

"Bragging" is unattractive. Assertions of one's personal greatness and personal accomplishments is not the best way for a candidate to make people think that she or he is in fact either great or accomplished. The best strategy is to let your audience come to that conclusion themselves. You don't have to school them. Of course, you do want the audience to know what you have done. But here might have been a better way to get the point across:

“Let’s have some real talk.” We need to win this presidential race. We need a new person in the White House. I have taken on tough campaigns before, and so far, every time I have run for office I have won. That's what I intend to do next November, too - with your help!

Check out the current incumbent, as an example of what we don't need. There is plenty of hubris, right there, and it's not a pretty sight!