Bob Dylan sure seems to know how to "keep on keepin' on," just like he said in Tangled Up In Blue. Dylan is still touring. In fact, I am hoping to hear Bob Dylan tonight,* at Stanford University's Frost Ampitheatre (pictured above). As a kid, growing up in Palo Alto, I used to play in Frost Ampitheatre, and later on, when I was in college, I wrote some lyrics that won my freshman dorm a prize in Stanford's 1962 "Spring Sing," performed in Frost! I don't know whether Bob Dylan has ever performed at Frost Ampitheatre before, but it's nice to have him in the neighborhood!

Just how long and how far Bob Dylan intends to push his "Never Ending Tour" remains to be seen. Dylan is seventy-eight years old, right at the moment, and he reminds us, in one of his songs, that "Death Is Not The End."

There isn't ever going to be an end to Bob Dylan's music, at least that is what I think, whether Bob Dylan is personally on stage with his harmonica and keyboard or not. And even if death is not the end, there will be a time when I am no longer "onstage" either. I have been thinking about that, and thinking ahead. Just in case there is ever a memorial for me, when that time comes around, I would like to think that some of Bob Dylan's music will be played. In fact, I have a playlist, my memorial favorites. Here are just a few of those songs, in no particular order: 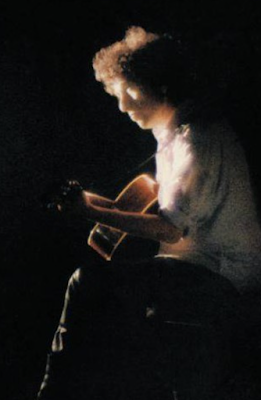 I Feel A Change Comin' On
Lyrics

End of the Line (The Wilburys)
Lyrics 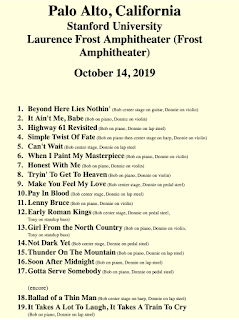