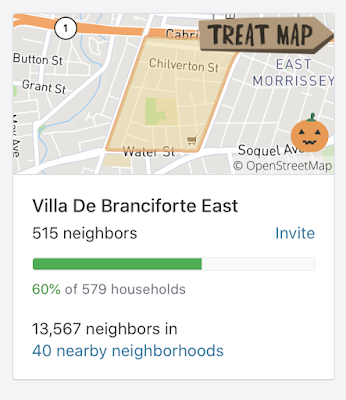 An Op-Ed by Tereza Coraggio appeared in the October 14, 2019, edition of The Santa Cruz Sentinel. Coraggio pointed out that the Nextdoor website, as operated in the City of Santa Cruz, has been unfairly promoting a highly problematic effort to recall two members of the Santa Cruz City Council.

Supposedly, Nextdoor allows "neighbor to neighbor" communications and helps to build a stronger, sharing community. The screenshot above, from Nextdoor, is highlighting possible trick or treating options for Halloween. However, this "building a stronger, sharing community" idea is not exactly what is really going on. At least, not according to Coraggio! Not everyone is "equal" on Nextdoor. Some people are a little "more equal" than others, to cite to a famous phrase from George Orwell. The "more equal" users apparently have the right to delete postings, and even to delete users, and have clearly been using their website powers to eliminate any Nextdoor users who want to raise questions, or objections, about the recall movement. Such problems are, apparently, not being experienced by recall promoters.

The concerns Coraggio raises, in the context of my local community, are being raised on the national level, too, with the main focus currently being on Facebook (on which this blog posting will appear). The Facebook policy is characterized as "letting politicians lie on Facebook." All the better not to fall into the Nextdoor trap, I guess, in which that Nextdoor website that users expect to be neutral is, in fact, not neutral at all, and in my hometown is promoting a recall effort that is weakly associated with the grassroots of the community, and that is largely being funded by development and landlord  interests.

Here is what I particularly appreciated about the Coraggio Op-Ed. Having pointed out the unfairness of what Nextdoor has been doing locally, she made a larger, and more important point:

To go through a nationwide, commercial network to connect with your neighbor is a contradiction in terms. If their true purpose was to promote kindness, it’s been proven that people are nicer in smaller groups. Let’s talk to the people on our own blocks, or contingent blocks, or your own neighborhood and contingent neighborhoods. That’s enough.

I think Corragio is completely correct in this observation, and that her advice is spot on!

Nextdoor, which trumpets its "community-building" effects, is claiming to offer a "treat" when it's actually providing a "trick."