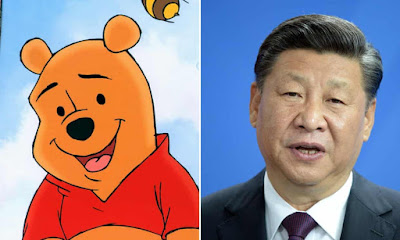 Nicholas Kristof, writing in The New York Times, headlines his October 10, 2019, column with the statement I have utilized as the title of this blog post. Here is a sampling from Kristof's column:

What happens when China’s enforcers come after Winnie-the-Pooh? Will we reluctantly hand over Pooh Bear? Really sorry about this, Winnie, but China’s an important market!

Winnie-the-Pooh has been banned in China online and at movie theaters because snarky commentators have suggested that he resembles the portly President Xi Jinping. But these days Xi doesn’t want to censor information just in his own country; he also wants to censor our own discussions in the West ...

I love China and believe in engaging it. We should try to work out a trade deal and cooperate on issues from climate change to drug trafficking. But let’s push back when Xi tries to stifle free discussion not only in China but also in America.

Most people reading this blog posting probably know about the news story that prompted Kristof's column. It is not about  Winnie the Pooh. It's about basketball. Here is how The Atlantic describes the controversy:

A posting on Twitter Friday by the Houston Rockets general manager Daryl Morey showing support for the Hong Kong protesters has fractured the relationship between the National Basketball Association and its business partners in China, a country with deep pockets and an insatiable thirst for the sport. The tweet featured an image bearing the caption “Fight for Freedom. Stand with Hong Kong.” It wasn’t up for long, but it was enough to jeopardize the NBA’s growing ties with the Chinese Basketball Association and Chinese corporations.

The bottom line, says The Atlantic, is that "The NBA Is Going to Have to Choose." Either the NBA is going to suprress all criticism of China by anyone associated with the league or there isn't going to be any NBA basketball in the world's most populous country.

Dieter Kurtenbach, who writes for the sports pages of the Mercury News, suggests that the need to make this choice is going to put the NBA in a real bind. After praising NBA Commissioner Adam Silver for having having "encouraged NBA players, coaches, and executives to speak up on political and societal issues," and after applauding Silver's refusal to "apologize" to China for Daryl Morey's tweet, Kurtenbach makes the following observation:


Remember: Silver works for the NBA’s owners, and they have shown — time and time again — that they are only interested in things that make them more money. Things like expansion in the second-largest economy in the world. And ethics don’t really come into play in such circumstances — ethics are things people with less money complain about (emphasis added).

I like basketball. And I like to live in a country where people can say what they want, even if I don't agree with them. China is definitely not that kind of a country, and that's more than a minor problem. It is a major problem that China effectively and actively suppresses the ability of Chinese citizens to speak out or engage in political discussions and political demonstrations of almost any kind. But I do agree with Kristof. In a way, this is a failing that the Chinese ultimately need to deal with themselves. We can help, of course, especially by providing a contrasting example. The idea that America can be a "beacon of liberty" to the world should not be mere rhetoric.

I also agree with Kristof that If China tries to get the United States to adopt its own totalitarian approach, and is successful in insisting that private businesses and other organizations suppress free expression in the United States, in order to be able to do business with China, then the United States needs to "push back."

I am hoping, thus, that Kurtenbach' s doubts about the NBA are not well founded. If the owners of NBA teams are ONLY interested in "things that make them more money," then capitulating to China's political demands will be a great temptation. If and when that happens, and if NBA owners succumb to that temptation to suppress the free expression of NBA players and coaches, I am going to go back to my pre-Warriors, non-television approach to my entertainment agenda.


Maybe others feel the same. I gather that Kristof does. If we don't resist, he says, and "if American business continues to kowtow, some day there may be a knock on the door, and there’ll be “Uncle Xi” sternly asking us to hand over Pooh Bear." 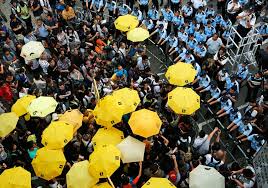