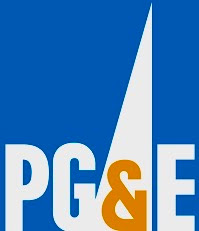 Let me speak of petulance and power. Two types of power, to be exact.


Because the corporation that delivers electric power to millions of California residents did not properly maintain its high-voltage electrical lines, and because it did not otherwise anticipate and prepare for the consequences that might result from a sparking or downed power line, in a time when global warming is making everything around the state of California both hotter and drier, an entire town was wiped out by a firestorm. 19,000 structures were totally consumed by fire, or badly damaged. At least eighty-six people lost their lives. They used to call it Paradise.


Other communities (and the individual persons who resided in them) also suffered from major fire-related damages attributed to the maintenance practices (or lack thereof) of PG&E. Huge fines and penalties were assessed against the corporation, which quickly caused the corporation to move into bankruptcy court.


Most recently (and I mean NOW, today), PG&E has decided to shut off electric power all over California. According to an article in this morning's San Francisco Chronicle, these corporate-imposed power outages could last for days and affect 2.4 million people. Here is a rough map of the areas affected by PG&E's corporate decision, made unilaterally, to shut off power: 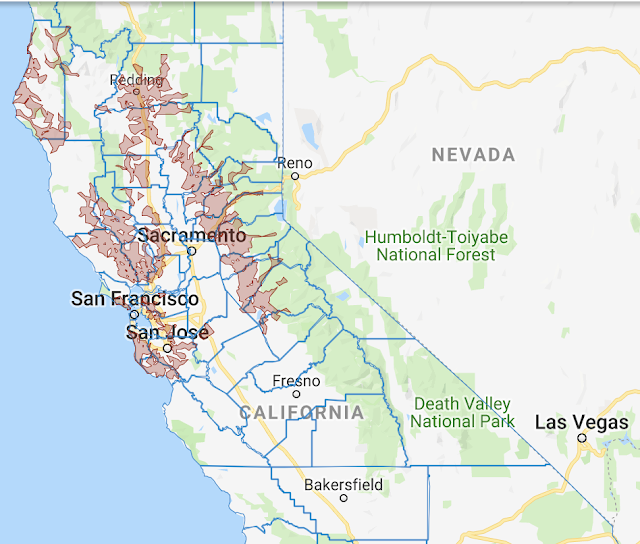 In Santa Cruz County, where I live (and where power is still flowing to me and my computer at 10:30 a.m. on Thursday), PG&E threatened to shut off power to some or all of its customers yesterday. It specifically threatened to shut off power to the county's biggest employer (UCSC). However, PG&E did not, in fact, shut off power yesterday, after having threatened to do so. Given what the university had heard from PG&E, however, the university administration cancelled all Wednesday classes. On Thursday, today, PG&E has shut down power to the University, and so classes have been cancelled today, too. That educational shutdown has affected approximately 20,000 students. Since there are only twenty class days each Quarter, some students may have lost 10% of the classroom instruction they expected (and have paid for).


I am talking about some impacts that I know about personally. The economic and other impacts experienced by millions of other PG&E customers are, I feel certain, equally or even more consequential.


Well, I think PG&E is expecting that this is what everyone will conclude, and that the public will applaud (or at least tolerate) its "precautionary" approach to public safety. "Frustration," though, is "growing," as the hardcopy edition of today's San Francisco Chronicle makes clear. The Mercury News is not happy either. The Mercury's Thursday editorial is headlined, "Massive shutdowns cannot become the new normal for PG&E."

So, now let's talk about "petulance," which the dictionary built into the Google search engine defines as "the quality of being childishly sulky or bad-tempered."

"Hey," the corporation is telling us, "you want safety, right? Well, the safest thing to do if you want to prevent powerline-related fires is simply to cut off all the power. No power, no danger. That's what you want, right? You fined us over a billion dollars for just trying to keep the power on. We've learned our lesson. Possible danger? No power. Seems like that's what the public wants, and PG&E aims to deliver!"

Well, no, that is NOT what we want. What we want is an electric power system that delivers power reliably and does not burn down entire towns as part of the bargain. Of course I want safe power, but I believe that PG&E is, in fact, being "childishly sulky" in its current shutdown strategy. Incidentally, I have to say, I do sometimes wonder whether our Governor couldn't do more than to express his "outrage," though that sentiment is definitely appreciated. Governor Newsom has declared that he is particularly "outraged" that power was shut off to the wineries he owns, right during the "crush." Somehow, I can't imagine that Governor Jerry Brown would sit around being "outraged," and not much more, as power is arbitrarily shut off to millions of California residents.

I, personally, think that what is going on right now is a show of corporate petulance and spite. We can start thinking of PG&E as:

But what PG&E is doing is something more, too. Let's talk about anorther kind of "power." I mean political power. The damages caused by earlier PG&E powerline failures are the result of corporate inattention to public health and safety. The corporation favored profits for its shareholders over the kind of investments that were necessary to protect the public.

Remember, PG&E is supposed to be a "public" utility. Let's face the facts, the public interest is simply not very high up on the PG&E agenda. An area in San Bruno was consumed by a firestorm because of a lack of PG&E investment in the safety of its gas lines, and then we move to Paradise. The Pleasanton Police Department made a joke about the shutdown (see below), but it really isn't a joking matter. 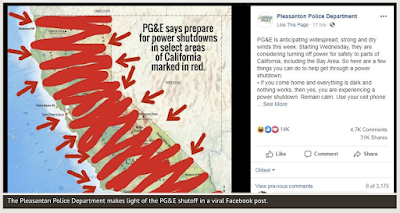 The latest shutdown strategy, I believe, is intended to augment PG&E's political power, so it can go to the Public Utilities Commission, and the State Legislature, and perhaps even the bankruptcy court, and have those bodies approve massive rate increases so the corporation's customers have to pay for the safety investments that the corporation ignored until it was too late for those who lost their lives or their property in the fires that are the reason that PG&E now says it needs to shut off peoples' power whenever there is a significant fire danger. Petulance and an attempt to increase the corporation's political power. I think that's what is going on. I think it's fair to say that I am not the only one to think this.

I want to float an idea. We call PG&E a "public" utility, correct? We are concerned about "public" health and safety, right?

Well, huge new investments may well be needed to make our power system safe. For one thing, we might start trying to decentralize it. Whatever the strategy, however, if hundreds of millions or even billions of dollars are going to flow, to make sure that no more San Bruno/Paradise disasters occur (and that our power supplies are reliable), then let's put the public in charge of our public safety and our public utilities.

If we don't, and if we continue to let PG&E have dominion over the critical utilities that we each depend upon, we know where it all leads. It leads to continued efforts by a private corporation to make corporate profits a higher priority than public service.

Let's call out PG&E's corporate petulance for what it is, and put the public in charge of our public health and safety, and our public utilities.

We sure couldn't do much worse!