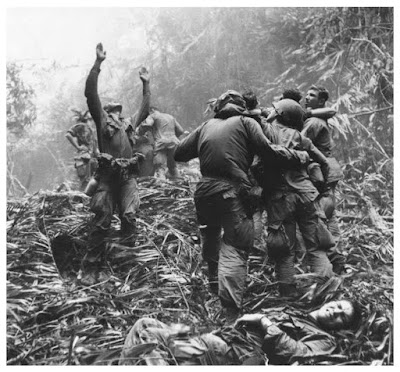 I have already written about my enthusiasm for the essays of George Scialabba. Wikipedia describes Scialabba as a "free lance book critic," and most of his essays are, indeed, formulated as relatively brief reviews of recently-published books. My earlier recommendation that people read Scialabba was based on my own reading of Slouching Toward Utopia.

Let me now extend my recommendation to Scialabba's book, Low Dishonest Decades: Essays & Reviews 1980-2015. His essay, "Indian Country," included in that book, was written in 1983. In this essay, Scialabba turns his attention to television, and specifically to "Vietnam: A Television History," produced by the Public Broadcasting Service in October 1983." Apparently, it would cost you over $200 to buy the DVDs. Reading Scialabba's essay will cost you a lot less, and may be more thought-provoking. Scialabba's main point about the television series is that it is impactful as a "presentation," truly showing the horrors of the Vietnam War, but is much less satisfactory as an "analysis" or "criticism."

Here is a brief excerpt from the "Indian Country" essay:

One episode opens with the narrator observing that "American combat troops went into Vietnam to prevent the Communists from taking over." That's one way of putting it. Here's a different way: "American troops went into Vietnam to consolidate its takeover by a corrupt repressive ruling elite, in opposition to what even American policy makers recognized was the only popular, honest, competent, genuinely nationalist political movement in the country." The latter formulation is no less accurate, as the documentary makes clear. But imagine hearing it, flat-out like that, in a narrator's authoritative baritone voice, on national television. Though true, it would sound stilted, strident, propagandistic. In the ideological universe of American mass media, radical truth risks sounding like propaganda.

The point is worth insisting on - it may well be the most important of all the lessons of Vietnam. Only recently, Stanley Hoffmann, at the far left of the political mainstream, could write in the New York Review of Books that America's purpose in Vietnam was to "protect a small country from aggression." This perfectly commonplace statement is almost Orwellian in its neat reversal of the facts ... If it is still not possible on national television to apply the words "aggression" and "invasion" to American behavior in Indochina, then the government has won and the peace movement has lost its unequal battle for American hearts and minds.


Later on in the essay, Scilabba lets us know the reason for his title:

American barbarism and American innocence come together for an instant during Vietnam: A Television History. The narrator says: "The Vietcong and the North Vietnamese army controlled large parts of South Vietnam. GIs called these areas 'Indian country.'" ... This remark appears out of nowhere and leads nowhere. Yet it leaves one breathless. After all, most of what GIs and the rest of us know about Indians comes from cowboy movies and TV shows. "Nation building" was what Americans frequently told themselves they were doing in Vietnam; the building of an American nation, in opposition to indigenous non-whites, was what those moview and TV shows mythicized ...

Television's mythic power is precious. But myth needs to be controlled by criticism - the world cannot afrord much more American innocence. Central America is literally "Indian country." And if the Rapid Deployment Force invades the Middle East, Arabs will soon be the new redskins ...

Read what Scilabba has to say, in "Indian Country" and in his other essays. Those who care about the future of American democracy, and who yearn for a world at peace, actually cannot afford to lose the battle for the hearts and minds of America. We can't assume, either, that we have truly "lost" it. We need to keep trying.

If we continue to consider the entire world to be "Indian Country," and believe that it is our American duty to tame and subdue it, the bodies of the dead will be piled ever higher. Unless we can first admit, and then change, our historic commitment to "aggression," we will also experience a lesson that is absolutely contrary to what we have been told in the cowboy movies.

Those we have allowed ourselves to think about as the "Indians" will come to say (and a lot of them already think it) that the "only good American is a dead American." You can probably recall a different formulation of that statement, popularized by former President Theodore Roosevelt.

Think about it! Turnabout is always fair play, and history is just about ready to turnabout on the United States of America. The more we keep asserting that everywhere else is "Indian Country," open for our aggression and domination, the more quickly that turnabout day will come.