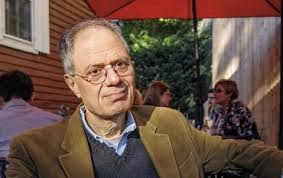 I teach Legal Studies classes at the University of California, Santa Cruz, and I tell my students (it's the truth) that one of the joys of that job is that it provides me with an opportunity to introduce them to thinkers with whom they may not be familiar. I usually give the students some names, and I almost always include: Hannah Arendt, Jill Lepore, Zeynep Tufekci, Antonio Machado, Ugo Betti, and Bob Dylan. Dylan, by the way, is the only Nobel Laureate on my list.

During a recent holiday, I had an opportunity to read some essays by George Scialabba, collected in his excellent book, Slouching Toward Utopia. Here is a link to a nice little write-up about Scialabba, and a recorded interview.

I think I am going to add Scialabba to my list, and I invite anyone who may be reading this blog posting to hunt him down. Scialabba mostly comments on books, and you will be treated to thoughts like the following, which comes from his commentary on a 1998 book by Alan Wolfe, One Nation, After All: What Middle-Class Americans Really Think About God, Country, Family, Racism, Welfare, Immigration, Homosexuality,Work, the Right, the Left, and Each Other:

"The parties are more partisan than ever," Wolfe complains, "and the leadership more dedicated to scoring ideological points than to governing the country." Wolfe concedes that this strictures applies "in particular" to the Republicans; but in fact, it applies only to the Republicans. The Democrats have been in flight from ideology for at least two decades. Think of the Democratic standard-bearers in recent history: Carter, Mondale, Dukakis, Hart, Bill Clinton, Gore, Gephardt, Biden, Obama, Hillary Clinton. There is not a spark of ideological passion in a single one of them....