Axios is a website that is something between Twitter and The Economist. At least, that is what Wikipedia says. Among other things, Axios will send you newsletters, if you sign up, giving you links to articles that Axios thinks are "worthy" of your attention.

One such article grabbed my attention a month or so ago. Its title was "The looooong game: A new threat." The "threat," as it turns out, is a threat to "capitalism." Bernie Sanders is just a "short game" problem for capitalism, I guess, though you wouldn't necessarily know that when you listen to our president, and to other Republican Party functionaries.

In the "long game," overcoming the threat to capitalism is going to be a little more difficult than knocking Bernie out of the running in the 2020 presidential campaign. Here is the Axios analysis (emphasis added):


Capitalism is under ... assault — by inexorable long-term population trends that may kill the ability of economies to grow.

As we have reported, a reckoning has emerged for capitalism as practiced — people across the U.S., Europe and elsewhere say something is fundamentally wrong with their living standards and the size of companies, and CEOs and politicians suddenly believe that they must act.

In an announcement yesterday, 181 of the top U.S. CEOs said they are changing their business objective — rather than solely seeking to satisfy shareholders, they will consider the desires of other constituencies such as communities and employees.

And in a report, the WSJ writes that U.S. state attorneys general plan to proceed with a probe of big tech companies for alleged anti-competitive behavior.

But experts suggest that such do-gooderism and investigations will be insufficient to turn the tide against an underlying, almost-unnoticed threat to the economic system that has fueled the entire industrial age.

The new threat: Most of us know that global wealth surged starting in the 19th century. What is less publicized is that the explosion was accompanied by similar breakout in population, and economists connect the two — when population grows, GDP has tended to rise with it (See chart - which starts, on the left, at the year 1500). 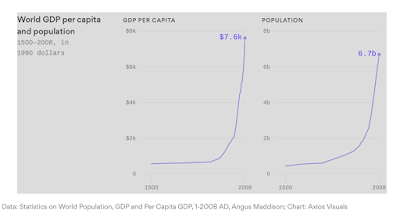 Shrinking, aging: But now, population growth across numerous countries — especially in the West — has stalled. By 2040, demographers say, the number of countries with shrinking populations will rise almost 50% — to 67, from about 46 now. At the same time, by 2050 about a quarter of the world population will be 60 or older.

Why that hurts capitalism: Fewer people mean less buying; older people also buy less than younger people. Hence, economies are likely to stagnate, then shrink — a challenge to capitalism, which is predicated on growth in GDP, profits, and wages.

"No capitalist economic system operates on the presumption that there will be zero or negative growth. No one deploys investment capital or loans expecting less tomorrow than today," writes Zachary Karabell, president of River Twice Research, in an essay at Foreign Affairs.

What's next: Richard Jackson, president of the Global Aging Institute, tells Axios that, as long as countries do not shut down markets with protectionism, companies will get around the problem for decades by exporting to still-growing populations. Experts note, for instance, that the populations of sub-Saharan Africa and the the Middle East will continue to rise through the century, according to current trends. (Yet eventually, he says, "we will run out of room and have to trade with Mars or something.")

Not mentioned, or considered to be a "threat," is the undeniable reality of global warming, which is actually threatening to make large portions of our planet uninhabitable. If you don't really buy the "let's trade with Mars" idea, and you insist that "capitalism" definitely requires both economic "growth" and population "growth," it does seem obvious that the "threat" to capitalism is dire.

However, let me suggest an alternative. Why not structure our human relationships, including our economy, so that "growth" is not what we aim at? Let's aim at stability, instead. Given the challenges we are going to have to confront, that will definitely be something that should keep us occupied. It isn't going to be easy.

In the "long game," the way I see it, forsaking "growth" as our objective is just about the only approach that will make it possible for human beings to survive.

And, while it may seem pretty radical to say this, what is good for the survival of human beings is good for "capitalism," too!