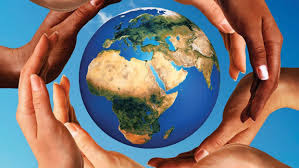 On June 29, 2019, Roger Berkowitz published an essay he called, "Human Being in an Inhuman Age." Berkowitz is an Associate Professor of Political Studies and Human Rights, and is the Academic Director of the Hannah Arendt Center at Bard College. My advice is to subscribe to the Hannah Arendt Center newsletter, Amor Mundi, and to read what Berkowitz and other contributors have to say as the newsletter comes to your inbox each week.

In his recent essay, linked above, Berkowitz has this to say:

For Hannah Arendt, the launch of Sputnik ... was ... an event “second in importance to no other.”  Sputnik meant that human beings had taken a real step toward actualizing a long-wished-for goal: to escape the earth. In Arendt’s telling of the story, earth alienation is part and parcel of the all-too-human dream of freeing ourselves from our humanity. Sputnik’s launch thus signified not simply the lowering of humanity’s stature, but humanity's destruction of humanity itself.

By destroying humanity, Arendt does not mean the replacement of working people by robots or even the possibility of nuclear Armageddon. The danger Sputnik poses to humanity is something else. She names the danger “earth alienation.”

For Arendt, to be human is to be earthly. We are born. We die. We make our way in a world that is mysterious. While we humans can also make and remake our human condition, our earthliness remains as the simple fact that our lives on earth are ultimately subject to fate and fortune beyond our control. The earth is Arendt’s name for that one condition of man’s world—his being a free gift from nowhere—that has been part of the human condition since the beginning of human history.

I have advanced what I call the "Two Worlds Hypothesis," which suggests that we cannot really understand our existence without understanding that we live in "two worlds," simultaneously. We usually don't make this distinction, and many of our most difficult problems come from the fact that we don't. We conflate our two-fold existence to the idea that we live in one world only. This is the human world that we create, that "political world" that I reference in the title to this daily blog.

While we do, most immediately, live in a world that we create together, we ultimately live in and must depend upon the "World of Nature," too. This is the "World that God Created," to use a religious language that seems fine to me, but that many people might not like. That World of Nature is "mysterious," as Arendt mentions in the quotation provided by Berkowitz. We didn't create it, and yet here we are! We are totally dependent upon that World of Nature. In any ultimate sense, we are creatures, not creators.

To be honest - as Arendt always sought to be ruthlessly honest - we try to avoid recognizing that our human world is, in fact, wholly dependent upon a world that we did not create, and a world into which we have been most mysteriously born. Our world takes second place to the "World of Nature," or the "World that God Created." You can pick some other way to describe it, if you like, but by whatever name we call it, this is the world that ultimately sustains all life, and upon which we are totally dependent.

Since human beings have gone to space, we can now see that the World of Nature that sustains us is nothing other than Earth itself. Remember, if we are honest, we need to confess that human beings have always resented being dependent upon a Creator, or upon anything or anyone else. This is one of the points that Arendt is making. Call it arrogance, or call it pride, human beings arrogate to themselves their supposed right to determine what will and should exist. The picture at the top of today's blog posting illustrates one of the things that Berkowitz is saying about Arendt's view of how human beings regard the Earth. Human beings have always wanted to escape the Earth, and to escape our dependency upon it, and this is a dangerous very wish. The picture suggests that it is we who "take care of the Earth," when the exact opposite is the case. The Earth takes care of us!

Alienation from the Earth is leading us to the end of our "human world," the world that we usually call human "civilization." Our efforts to escape from the constraints that Earth imposes, and to disregard its laws, are not a route (as we suppose) to liberation. They are the efforts that mark our doom.

Remember those two hundred dead reindeer. First the reindeer; then us!

Postscript:
If you would like to take your theology (and political theory) by way of the music of Bob Dylan, you can watch this video of Dylan singing "License to Kill" on the Dave Letterman show. Dylan's lyrics start out with this observation:

Man thinks ’cause he rules the earth
He can do with it as he please
And if things don't change soon, he will
Oh, man has invented his doom
First step was touching the moon ...