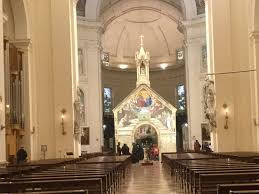 I have been visiting Assisi, the home of Saint Francis. You probably know the story of Saint Francis, at least in general. I found it quite moving to hear the story again, as told by a guide who provided a very small group of us with a tour of Assisi, introducing us to a number of churches where Francis had worshipped, and where it is possible to see the relics of his life.

Francis was born to a wealthy family. While still young, Francis was called to follow Jesus, and to lead a life of poverty. His father was not pleased. Francis nonetheless "persisted," to use a word that Elizabeth Warren has helped make prominent as a description of a person who will not bend personal principle to conform to the wishes of the powers that be. Francis' father was one of those "powers." Francis put a life of wealth and privilege behind him, and in an early action that infuriated his father, took monies from the family business to restore two small churches. Francis had felt himself called to "restore the church," and he began his work of restoration by engaging in a very physical reconstruction of two churches which were falling into ruin.

One of the two churches that Francis restored is now called Porziuncola, or Portiuncula, in Latin. Literally, the word means "a small portion of land." A picture of the small church can be seen above (ignore the surroundings for the moment). I visited this small church personally, and sat inside. Its outside dimensions, I would estimate, are something like 20 feet wide by 30 feet, long, and perhaps 30 feet in height. It truly sits on a VERY "small portion of land." And it sits, still, in its original location. It is the Church in which Francis died.

Now, let's talk about the surroundings. The photo below is a picture of the Papal Basilica of Santa Maria degli Angeli, located in the valley below the hill city of Assisi. Its scale is monumental, rivaling the very largest cathedral you can imagine. As you can see from the first photo, the Portiuncula sits inside the walls of the Basilica, which has been built around it, surrounding it. The little church is like a very small sparrow in an immense cage, a cage so large that an eagle would feel free to soar without limit. 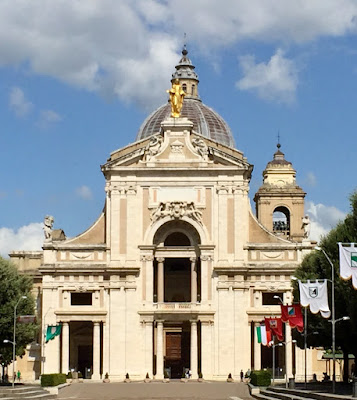 The "humility" of the Portiuncula may not be immediately apparent from the picture at the top of this blog posting. The spectacular illumination of the church makes it appear lustrous and ornate. The actual church is anything but that. It is simple. It is basic. It is, in fact, a perfect representation of the message of Francis of Assisi. The Basilica, on the other hand, is a monument to a powerful church that has not quite gotten the point. It is ironic, in the extreme, that the preaching of Francis, which asked us to live simply, and which finds a physical representation in the little church that he restored, has been captured, and swallowed up, by a Church that would benefit from learning, once more, the lessons that Francis taught.

We, too, should learn from the little church, and not pursue the example of the grand Basilica. The lessons of Saint Francis are exactly the lessons we need to remember today!