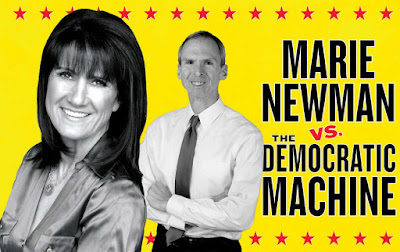 An article in the August 12/19, 2019, edition of The Nation carries the headline you can read in the graphic above. Dan Lipinski, pictured on the right, is an incumbent Democratic Congress Member from the Third District of Illinois. He is being challenged in the Democratic Party Primary Election by Marie Newman. She is on the left.

Those who had hoped that Bernie Sanders might have been given a fair chance to represent Democrats in 2016, as the Party's presidential candidate, well understand this model - and resent it. Those with power in the Party think they know better than the people themselves. That's the model. It doesn't sit well with those who still like the sound of "Let the people decide!"

While ordinary Democratic voters theoretically get to decide whom they would like to represent them and their Party in upcoming general elections, the leadership of the Democratic Party thinks it "knows better" than the voters. The Nation reveals that the DCCC has told campaign consultants that they must not represent any candidate who is challenging an incumbent Democrat in a Democratic Party Primary. If a consultant does that, the consultant will be "blackballed," and the DCCC will not hire that consultant, or recommend that consultant, for any Democratic campaign, anywhere in the country.

The purported purpose of having a primary "election" is to allow ordinary voters to make up their own minds about who should represent them and their Party in a general election. This idea is fundamental to the objective of allowing democratic self-government to decide issues of political representation. I get more money-requesting emails from the DCCC, and from Nancy Pelosi, than from any other source. I'm not giving the Party a dime, since it's pretty clear to me that using the word "democratic" in their name is a complete misnomer. I actually do believe in democracy!

Another point made in the article in The Nation is that candidates should run because they want to "do something," not becaue they want to "be somebody." From the local level to the national level, you can see governmental failure in technicolor when it is clear that this principle has been disregarded.

Democrats? Let's insist that our Party gets that point!