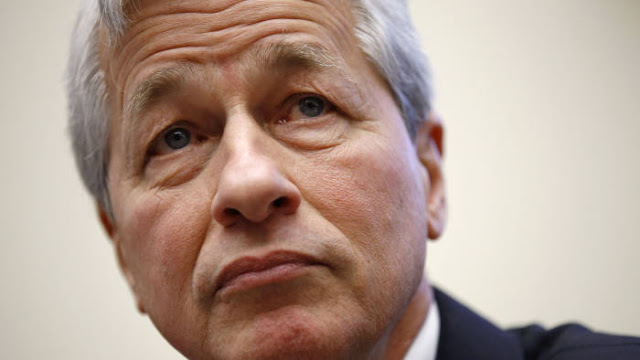 Jamie Dimon is pictured above. He is Chairman and CEO of JPMorgan Chase, which is the largest of the "big four" American banks. Dimon gets paid about $30 million a year (in case you are interested). He is definitely one of those people that Ry Cooder was thinking about when he wrote that wonderful song, "No Banker Left Behind."

Here is a lengthy excerpt from an article published on the CNBC "Markets" Website. The new-minted corporate commitment to everyone (not just corporate shareholders) also appeared in a full page ad in The Wall Street Journal, signed by 181 corporate CEOs.

Hey, maybe these guys are serious (though there is skepticism that they are). You can read all about it right here:

Shareholder value is no longer the main focus of some of America’s top business leaders.

The Business Roundtable, a group of chief executive officers from major U.S. corporations, issued a statement Monday with a new definition of the “purpose of a corporation.”

The reimagined idea of a corporation drops the age-old notion that corporations function first and foremost to serve their shareholders and maximize profits. Rather, investing in employees, delivering value to customers, dealing ethically with suppliers and supporting outside communities are now at the forefront of American business goals, according to the statement.

“While each of our individual companies serves its own corporate purpose, we share a fundamental commitment to all of our stakeholders,” said the statement signed by 181 CEOs. “We commit to deliver value to all of them, for the future success of our companies, our communities and our country.”

The conscience of Wall Street has been at the forefront of American business and politics recently as issues about economic equality and fair business practices dominate the 2020 election stage and the overall news cycle.

The Business Roundtable, founded in 1972, has put out many statements on the principles of corporate governance since the late 1970s. It said this new definition “supersedes” past statements and outlines a “modern standard for corporate responsibility.”

“The American dream is alive, but fraying,” Jamie Dimon, chairman and CEO of J.P. Morgan Chase and chairman of Business Roundtable, said in a press release.

Along with Dimon, the statement received signatures from chiefs including Amazon’s Jeff Bezos, Apple’s Tim Cook, Bank of America’s Brian Moynihan, Dennis A. Muilenburg of Boeing and GM’s Mary Barra.

“Major employers are investing in their workers and communities because they know it is the only way to be successful over the long term. These modernized principles reflect the business community’s unwavering commitment to continue to push for an economy that serves all Americans,” said Dimon.

Another one of the signatures is from BlackRock chief Larry Fink, who has previously called on CEOs to reevaluate the purpose of a corporation, specifically the “inextricable link” between purpose and profit.

“Purpose is not the sole pursuit of profits but the animating force for achieving them,” Fink wrote in his 2019 annual letter to shareholders. “As divisions continue to deepen, companies must demonstrate their commitment to the countries, regions, and communities where they operate, particularly on issues central to the world’s future prosperity.”

Fink said that fundamental economic changes and the failure of the U.S. government to provide lasting solutions has forced society to look to companies for guidance on social and economic issues, such as environmental safety and gender and racial equality.

One of my friends saw the CNBC article and suggested to me that the corporate executives who signed on to this statement must be anticipating an electoral victory by Elizabeth Warren, and are trying to "play nice" in advance.

I was interested to see that not all business leaders agree with this newest initiative of the Business Roundtable. According to an article in Tuesday's New York Times, the Council of Institutional Investors "forcefully disavowed" the ideas set out in the Roundtable Statement. "Accountability to everyone means accountability to no one," the Council said. "It is government, not companies, that should shoulder the responsibility of defining and addressing societal objectives...."

Me? I guess I am with the Council of Institutional Investors. I'm sticking with democracy. Both Donald Trump and Jamie Dimon look just a little bit too much like Benito Mussolini for my taste. I don't think we need to count on the millionaire bankers and the corporate CEOs to take care of the public's business.

We can do it just fine ourselves!