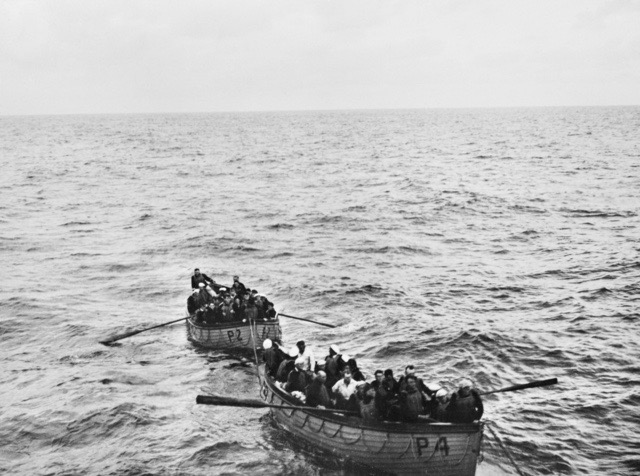 In an article titled "Lifeboat Earth," John Feffer has raised an important question: "Is China or the Green New Deal the Answer to Climate Change?" Feffer's article is rather long. Here's the basic premise:

Imagine not one but two lifeboats of survivors bobbing in an endless, empty sea. Both contain the same number of people and a limited amount of food. Based on some educated guesses by one knowledgeable crewmember, the boats are at least five days from land, if everyone rows together and they don’t veer off course.

In the first boat, the survivors debate the problem: Should they stay in place and conserve their energy or strike off in search of land? They divide into three committees to address the different aspects of the problem and present their findings, making sure everyone has input. They debate for hours, growing weaker and weaker until they no longer have the energy to do anything and the issue decides itself.

In the second boat, one person takes control, believing he alone has the skill and knowledge to steer the lifeboat toward land. Not everyone agrees, but dissenters are silenced. The others agree that there’s no time for more discussion. The new leader imposes rules on who rows and who eats. When someone falls deathly ill, he orders the incapacitated man thrown overboard.

The second lifeboat is moving at a good pace -- but is it going in the right direction?

On Lifeboat Earth, time and resources are similarly limited. According to most climate scientists, the window of opportunity to prevent irrevocable climate change is about a dozen years. Opinion is divided, however, on how to address this problem with the urgency it requires.

The international community has tried, in a roughly democratic fashion, to avoid the apocalypse. In 2015, the countries of the world came together in Paris and negotiated a non-binding climate accord that was a victory for compromise but a failure for shrinking the planet’s actual carbon footprint. In a number of countries around the world, democratic elections subsequently brought climate-change deniers like Donald Trump to power, further compromising that accord.

In this way, the planet risks following the first lifeboat scenario: talking ourselves to death.

The second lifeboat option -- think of it as eco-authoritarianism -- seems to better fit the temper of the times. The current climate emergency coincides with a profound disillusionment with the liberal world order. Authoritarianism has become significantly more popular these days, even in otherwise democratic societies like India, Brazil, and the United States.

Feffer does not definitively conclude that eco-authoritarianism is the "correct" response to the climate crisis faced by every human being on earth. In fact, he criticizes the approaches currently being pursued by China. Feffer is pretty clear, however, that endless debate, without decision, is just not going to work. Not only won't it save us, it will ultimately lead not only to "eco-authoritarianism" but to what I suggest might better be called "eco-totalitarianism."

It is time to start doing things! Really! No kidding! Feffer's bottom line is this:


The Green New Deal isn’t just an important policy initiative. It may be the last democratic method of guiding Lifeboat Earth to a safe harbor.