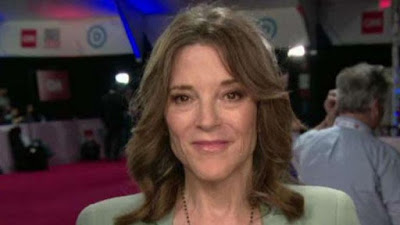 Pictured is Marianne Deborah Williamson. Wikipedia identifies Williamson as "an American author, lecturer and activist ... [reporting that Williamson] has written 13 books, including four New York Times number one bestsellers in the "Advice, How To and Miscellaneous" category. She is the founder of Project Angel Food, a volunteer food delivery program that serves home-bound people with HIV/AIDS and other life-threatening illnesses. She is also the co-founder of the Peace Alliance, a nonprofit grassroots education and advocacy organization supporting peace-building projects."

In addition to all of the above, Marianne Williamson is running for president. Maybe you have seen her on stage, during the two Democratic Party Primary Debates that have been held on CNN and MSNBC. Most recently, in the second of the two televised debates held so far, Williamson commented on the contaminated water crisis in Flint, Michigan. This is what she had to say:

What happened in Flint would not have happened in Grosse Pointe [a very wealthy city just adjacent to Detroit, Michigan]. This is part of the dark underbelly of American society. The racism, the bigotry, and the entire conversation that we’re having here tonight. If you think any of this wonkiness is is going to deal with this dark psychic force of the collectivized hatred that this president is bringing up in this country, then I’m afraid that the Democrats are going to see some very dark days.

According to David Brooks, The New York Times' columnist, Williamson "knows how to beat Trump." This is not quite a full endorsement of her candidacy, but it is certainly getting there!

Williamson doesn't strike me as the "Chief Executive" type, but that doesn't dissuade Brooks. Brooks thinks that political debates focusing on policy issues (all that "wonkiness" stuff) are simply not going to motivate the kind of political changes he'd like to see. Brooks doesn't believe that emphasizing "policy" concerns can defeat Donald Trump's reelection effort. That's because, as Brooks sees it, the most important issues are not "policy" issues, at all.

According to Brooks, Trump is a "cultural revolutionary" who is attempting to transform "who we are as a people" and our "national character." To beat Trump, we need an "uprising of decency." Williamson, says Brooks, understands that this is where the battle must be fought, and that we need, in this election cycle, to expose and destroy the "dark psychic force" that is corrupting American culture from within, under the leadership of our current president.

I agree that "culture" is important, and that comparing the "policy positions" of the various candidates is not really the best way to decide who we should select as president. On the other hand, I am not really convinced that appeals made on a "psychic" level, aiming to advance "cultural" concerns, will translate into the kind of changes, political and cultural, that the nation so desperately needs.

Might I suggest that good old fashioned "politics" is what we should all focus on. In other words, however we motivate their involvement (by appeals to voters on the basis of "policy," or by an appeal that emphasizes the need to combat "dark psychic forces"), what candidates for president should be doing is to meet and mobilize ordinary American citizens to realize that they, the people, are actually in charge of the government, and that in a democratic, self-governing society ordinary people had better make sure that the people they elect to represent them should reflect their deepest values, as well as having a commitment to policies that benefit the majority, and the competence to achieve results.

I have a lot of confidence in "politics." I used to be a politician, myself, and my twenty years of experience convinces me that ordinary people can change the world - and that they are smart enough, and decent enough, to find representatives who can help them accomplish their objectives, and to deal with the dangers that confront them.

The way to "beat Trump," in my opinion, is simply to make sure that the majority of the American people know that they have an opportunity to elect a person of personal integrity, and a person who has a commitment to work for policies that will benefit the people themselves, and the competence and ability to be successful. There are quite a few persons on that Democratic Party debate stage who can fill that prescription.

I think that our nation is not characterized, at its foundation, by dark psychic forces, but by the very kind of "decency" that Brooks wants us to manifest in our government.

I do have a lot of confidence in "politics," and I am not afraid of letting the people of the United States select the person who will best represent them! I think they are going to make the right choice!