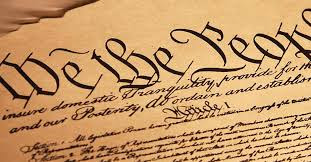 According to President Donald Trump, Article II of the Constitution gives him the power to "do whatever he wants." This was noted in a July 23, 2019, column in The Washington Post. The newspaper has a "paywall," and given the way The Post's paywall works, you may or may not be able to access the article by clicking that link. You don't have to take it from Jeff Bezos' newspaper, however. Here is a YouTube video of the president, making this claim himself:

For those who would like to read the actual document being analyzed by the president (the Constitution, I mean), you can click this link for the full text. There is no "paywall" for the Constitution - at least not so far. Unless something rather dramatic has happened to American government between the time I am writing this and the time you are reading it, that link to the Constitution should definitely work!

Let me outline just a few of the provisions of the Constitution that bear on the president's assertion that he can "do whatever he wants." I suggest that we begin with Article I, which comes before Article II. A non-delusional reading of Article I might give any president the idea that the president's powers outlined in Article II are in "second place" for a reason. Here is the reason:


Section 1
All legislative Powers herein granted shall be vested in a Congress of the United States, which shall consist of a Senate and House of Representatives.

After the Preamble, which makes the point that "We, the People" are ultimately in charge, the words quoted above are the very first words found in the Constitution. Article I is quite lengthy, elaborating on how the Members of Congress are elected and what they are supposed to do, but there is no doubt that ALL legislative powers granted to the federal government are exercised by the Congress, not by the President. Maybe he can't do "whatever he wants," after all! At least, not if the Congress has legislated something different.

Let's now direct our attention to Article II. The president acts like this is some sort of recently-discovered grant of authority, but Article II has actually been in the Constitution from the beginning. Here are the key statements about the powers of the president found in Article II:

1: The executive Power shall be vested in a President of the United States of America. [ ]

8: Before he enter on the Execution of his Office, he shall take the following Oath or Affirmation:—“I do solemnly swear (or affirm) that I will faithfully execute the Office of President of the United States, and will to the best of my Ability, preserve, protect and defend the Constitution of the United States.”

1: The President shall be Commander in Chief of the Army and Navy of the United States, and of the Militia of the several States, when called into the actual Service of the United States; he may require the Opinion, in writing, of the principal Officer in each of the executive Departments, upon any Subject relating to the Duties of their respective Offices, and he shall have Power to grant Reprieves and Pardons for Offences against the United States, except in Cases of Impeachment.

3: The President shall have Power to fill up all Vacancies that may happen during the Recess of the Senate, by granting Commissions which shall expire at the End of their next Session.

He shall from time to time give to the Congress Information of the State of the Union, and recommend to their Consideration such Measures as he shall judge necessary and expedient; he may, on extraordinary Occasions, convene both Houses, or either of them, and in Case of Disagreement between them, with Respect to the Time of Adjournment, he may adjourn them to such Time as he shall think proper; he shall receive Ambassadors and other public Ministers; he shall take Care that the Laws be faithfully executed, and shall Commission all the Officers of the United States.

We have a government with "limited powers," and the powers that the federal government does have are apportioned among the Congress, the President, and the Supreme Court in a way that intentionally allows them to "check and balance" each other.

That is the way it has always been. Nothing has changed (except in the assertions made by the current president, who is claiming powers no other president in history has ever tried to claim).

The president is not authorized to "do whatever he wants."

Let's not forget it!