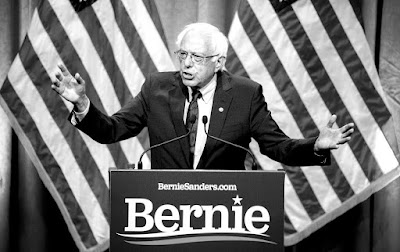 On July 16, 2019, The Nation published an article by Greg Grandin, a professor of history at New York University. Grandin's article was titled, "There’s One Heresy That Sets Bernie Apart From All Other Dem Contenders to Unseat Trump."

The "heresy" discussed by the article is not that Bernie Sanders is willing to have the term "socialist" applied to his political positions. Instead, as Grandin presents it, Sanders' "heresy" is arguing that Americans should have "social rights," as well as "individual rights."

This is a "heresy," incidentally, that Grandin says was also professed by President Franklin D. Roosevelt!

Sanders, by waging practically a one-person crusade to legitimize social rights, is striking at the core cultural belief that holds the modern conservative movement together: an individual-rights absolutism that has, today, little to do with economics or political philosophy but rather forms the essential, cultish element of right-wing identity politics ...

Sanders made the distinction between these two sets of rights the centerpiece of his historic June 12 speech at George Washington University, in which he defended democratic socialism as the country’s only possible redemption, not just from Trump but also from the rotten system that produced Trumpism. Calling for a 21st-century bill of economic rights, one modeled on Franklin Roosevelt’s 1944 proposal for a Second Bill of Rights, Sanders said, “We are proud that our Constitution guarantees freedom,” but now “we must take the next step forward and guarantee every man, woman, and child in our country basic economic rights—the right to quality health care, the right to as much education as one needs to succeed in our society, the right to a good job that pays a living wage, the right to affordable housing, the right to a secure retirement, and the right to live in a clean environment.”

First, Americans have always believed that we are more than a mere collection of individuals. Look at the banner in the eagle's beak. It proclaims a truth to which the United States has been pledged from the beginning: "E pluribus unum," "out of many, one."

There is a second phrase on that dollar bill, too. Why does Sanders call his presidential campaign an effort at "revolution?" Probably because he is, as Grandin says, proposing that Americans today do exactly what those revolutionaries did in 1776, and proclaim and establish a "new order in the world," a "novus ordo seclorum." This phrase is a constant reminder that such a revolutionary approach to government has always been what this nation is all about.

It would be something new, and revolutionary, to insist that our common bonds, as Americans, define a set of "social rights," it being so clear that the Bill of Rights has proclaimed and established an unbreakable commitment to a set of "individual rights."

Roosevelt did urge such a national commitment to "social rights." He called for the nation to recognize and secure Four Freedoms:

This is a program that calls for the nation to secure both individual and social rights. Is that really a "heresy" in the United States today? Just how revolutionary do you want to be?

These two questions are pertinent as you determine how to cast your vote in the presidential primaries that will take place starting early next year. Grandin makes a good argument that Bernie Sanders is different from the rest.

As Fox News once said: "You decide!"