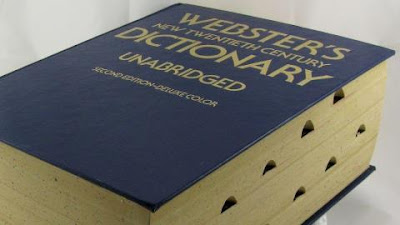 Deceptive or based on deception; seeming plausible, but based on pretense or insincerity; deceptive; misleading; insincere; specious; as, meretricious arguments.

My first teaching job was at Linson College, in Macau. During the summer of 1968, I participated in a Volunteers in Asia summer program, and my assignment was to teach English vocabulary to the Chinese students who attended this rather extraordinary school.

Not only did I love the school, and the students, and the school's amazing founder, Linson Dzau, I loved teaching vocabulary. I have always loved words, and my way of learning them was to write down words I didn't know, as I was reading a book or an article, and then to look up those words, later. I typed out the definitions on "blue index cards," which I then filed and often reviewed. I think I ended up with about two linear feet of blue index cards before I stopped this practice. I only stopped it after computers took over, and when I no longer had a typewriter to type the cards!

All this is simply by way of preface, to let readers know how I most probably came across, and learned the definition of, the word "meretricious." It is one of my favorite words! Fortunately, given its definition, I don't find a lot of excuses to use it.

Having written yesterday about "socialism" and "capitalism," expressing my dubity about both of those "-isms," my blog posting today is focused on an article published in the July 8, 2019, edition of The Wall Street Journal. The column on which I am commenting was authored by Helen Raleigh, who bills herself as an "inspirational speaker." Her article is titled, "What Socialism Meant for My Great-Grandfather."

I was outraged by Raleigh's use of the word "socialism" in her article, as published in The Journal. Given that the existence of internet "paywalls" makes linking to an online publication problematic, I am providing a significant excerpt from Raleigh's article below (with emphasis added):

My great-grandfather wasn’t a wealthy man, but he was relatively well-to-do by the standard of his time ... He hoped one day to become a government official. Unfortunately, the imperial court ceased to exist when rebels forced the last Qing emperor to abdicate in 1912. With no court to serve, he became a wheat farmer.

After the Communist Party took over in 1949, it pushed for “land reform” ... The Party claimed landowners were class enemies and exploiters of the poor, and that unequal land ownership was the main cause of social injustice.

Though many villagers shared similar economic conditions, a government worker came to my great-grandfather’s village and divided everyone into five classes: landlords, rich peasants, middle peasants, poor peasants and laborers. Then a work team organized “speak bitterness” struggle sessions so the poor could vent their frustration against the “rich.”

The work team was good at stirring up envy and greed and inflaming hatred toward any villager who owned property. My great-grandfather often had to stand in front of the village with his head bent, listening to his neighbors and relatives accuse him of wrongdoings that were grossly exaggerated or plain false ... My great-grandfather’s life was spared, but neighbors didn’t hesitate to take his land, cattle and even farming tools away from him. He became a landless farmer overnight.

The poor farmers didn’t come out ahead for long. In 1953 the Chinese government started a movement to collectivize agriculture. The land that had been handed to poor farmers was gradually returned to the state. By 1958 there was no private land ownership. Private farming was prohibited. Farmers ... had to follow the orders of local Communist leaders, many of whom didn’t know much about farming. Crops perished and millions of people starved.

A few years later, I immigrated to the U.S. My great-grandfather’s plight and China’s history have cemented my belief that socialism is evil and I was lucky to escape it. Yet nowadays, I sometimes feel as if I’m back where I came from. I want to scream every time I hear the American left’s eerily familiar slogans: “Make the rich pay their fair share,” “Level the playing field,” “You didn’t build that.” This is the same sort of rhetoric the Chinese Communist Party used against landowners like my great-grandfather. The policies advanced by that rhetoric ruined China’s economy along with millions of lives.

The American left offers nothing new. Socialism always begins with a great promise and ends in disaster. It has failed every time and everywhere it was tried. Let’s not throw away American prosperity so that a few leftists can give it another go.

Raleigh is making reference to Elizabeth Warren and Bernie Sanders. Suggesting that these presidential candidates are advocating the kind of totalitarian policies adopted by the Chinese Communist Party under Mao Zedong is more than merely mistaken. The claim is massively deceptive. Both the newspaper and our "inspirational" Ms. Raleigh should be ashamed.

The word "meretricious" most definitely comes to mind!