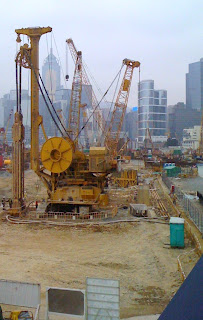 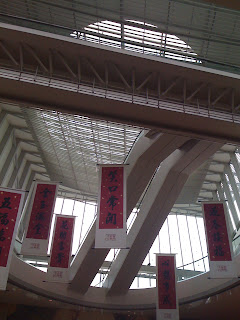 Marilyn and I were here before, in the summer of 1968. It's probably correct to say that we came separately and left together.

different now. Not British. Chinese. And at least in terms of a first impression, Hong Kong is obviously in the midst of a building boom that has been going on for a very long time.

The train from the airport to downtown was the best train, by far, I've ever ridden. The IFC (International Financial Center) shopping mall, which is right next door to the main Post Office - and to the Central Terminal for train, ferry, and bus transportation - was by far the nicest example of such a commercial structure I've ever seen.

In the next day or two, I intend to investigate what has happened to the natural spots I visited before, particularly in Macau, where I taught vocabulary to Chinese students at Linson College. Linson College was named for its proprietor, Linson Dzau, who was probably about 70 years old in 1968, and who took me under his wing. Linson Dzau told me that it was not necessary to sleep more than five hours per night, and to sleep more was to waste your life.

By and large, I've taken his advice!