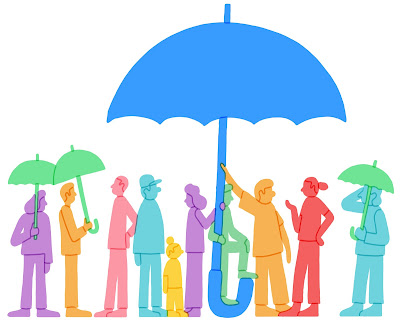 A column that appeared in the Sunday, July 7, 2019, edition of The New York Times addressed the "capitalism versus socialism" debate that seems to be attractive to at least some people who have already become actively engaged in the upcoming 2020 presidential race.

Former Colorado Governor John Hickenlooper, for instance, who is a Democrat, seems to think that this is a key concern for the voters. Hickenlooper was apparently booed, recently, when he made a point of saying, at a California Democratic Party event, that "Socialism is not the answer." In this, Hickenlooper agrees with President Trump, which is probably why Hickenlooper got booed.  Maybe he even wanted to be! Meanwhile, another Democrat in the race, Elizabeth Warren, who is generally acknowledged to be one of the more "progessive" candidates, and certainly has very little in common with Trump, has gone out of her way to profess a commitment to capitalism.

Maybe this "capitalism versus socialism" debate will turn out to be an important, in terms of "electability." You can color me skeptical, however. Personally, I am not much of an "-ism" kind of a guy. I don't care what the label is, I want to examine what sort of politics is being proposed, and I tend to think that I am not that different from most voters.

State ownership of the means of production, the classical definition of "socialism," is definitely not something I'd like to adopt as my bottom line requirement for a good society. By the way, I don't think Bernie Sanders would go there, either!

Similarly, the idea that those who have "money" (i.e., "capital") need to be free to make change by letting market competition between those capitalists lift all boats, which I believe is the basic argument for "capitalism," is  pretty much what we have got now, and what we have now is not working. I am definitely not on the side of "capitalism" if that means more of the same.

Because of my skepticism about the debate of the "-isms," I found that recent Times' opinion piece to be quite refreshing. Law professors Ganesh Sitaraman and Anne L. Alstott suggest that our economy should always countenance, and perhaps even explicitly provide for, a "public option." In other words, if "competition" is what makes capitalism great, and if concern for social and economic justice is what makes us want to be socialists, then we should let our public institutions (the government, representing the entire society) get into the economic ring with private business. That is essentially the idea rejected by the Congress when the Affordable Care Act was being debated, and while I, personally, think Medicare can outperform private health insurance, I'm willing to let it compete, and to "prove itself in the market," as those capitalists always say is the best argument for "capitalism."

In fact, the "capitalists" generally use their money to make sure that there is never any fair competition in "the market," because what they really prefer is "socialism for the rich and capitalism for the rest of us."

Think about that "public option." Not a bad idea!