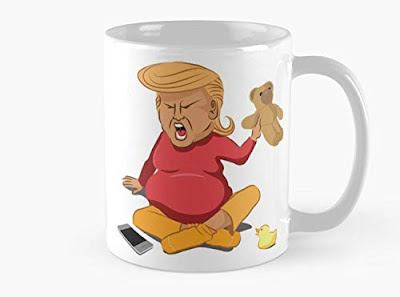 Our president appeared to have a kind of political temper tantrum or meltdown the other day, venting his ire and frustration at four elected members of Congress (all women of color), saying that they should "go back to where they came from." Since all of them are United States citizens and represent specific Congressional Districts, "going back to where they came from" would send them off to New York, Boston, Minneapolis, and Detroit. I bet that each one of them shows up in her district on most weekends already!


Still, while the president's frequent "temper tantrums" aren't actually "real," but are simply a political technique, it could be helpful to think about how to react to them as if they were real. I consulted the Internet, source of all modern wisdom, asking it to tell me "how to handle tantrums and meltdowns." Here is what I learned about that topic from the Child Mind Institute:


Learned behavior
Since parents often find tantrums impossible to tolerate—especially in public—the child may learn implicitly that throwing a tantrum can help him get his way. It becomes a conditioned response. “Even if it only works five out of 10 times that they tantrum, that intermittent reinforcement makes it a very solid learned behavior, so they’re going to continue that behavior in order to get what they want.”

Responding to tantrums
When tantrums occur, the parent or caregiver’s response affects the likelihood of the behavior happening again. There are lots of very specific protocols to help parents respond consistently, in ways that will minimize tantrum behavior later ... They have in common the starting point that parents resist the temptation to end the tantrum by giving the child what he wants when he tantrums ... The goal is to ignore the behavior, to withdraw all parental attention, since even negative attention like reprimanding or trying to persuade the child to stop has been found positively reinforce the behavior.

Attention is withheld from behavior you want to discourage, and lavished instead on behaviors you want to encourage: when a child makes an effort to calm down or, instead of tantruming, complies or proposes a compromise. “By positively reinforcing compliance and appropriate responses to frustration, you’re teaching skills and—since you can’t comply with a command and tantrum at the same time—simultaneously decreasing that aggressive noncompliant tantrum behavior.” [emphasis added]

Anyone who has been a parent with a "difficult" child, or who is a grandparent with such a grandchild, knows that this advice is easier to understand than to follow. I am pretty sure, though, that this advice for parents would work for politicians and others who have to confront one of the president's faux tantrums. Frank Bruni (a columnist who writes regularly for The New York Times) seems to agree!

Ignoring the president's outrageous statements, instead of confronting, condemning, and refuting them, might be the best way to take the wind out of our blowhard president's sails.