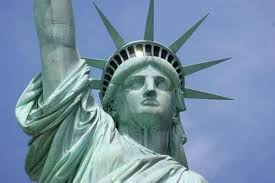 Reflecting on the political disputation that arose after our president told four Members of Congress (all women, and all people of color) to "go back to where they came from," CNN noted that there is "a sobering truth to Trump's racist tweets."

As CNN put it, America has always been divided. On the one hand, many have seen our country as a refuge and asylum, as so wonderfully articulated in "The New Colossus," the famous poem by Emma Lazarus, found on a plaque attached to the base of the Statue of Liberty:

Not like the brazen giant of Greek fame,
With conquering limbs astride from land to land;
Here at our sea-washed, sunset gates shall stand
A mighty woman with a torch, whose flame
Is the imprisoned lightning, and her name
Mother of Exiles. From her beacon-hand
Glows world-wide welcome; her mild eyes command
The air-bridged harbor that twin cities frame.
“Keep, ancient lands, your storied pomp!” cries she
With silent lips. “Give me your tired, your poor,
Your huddled masses yearning to breathe free,
The wretched refuse of your teeming shore.
Send these, the homeless, tempest-tost to me,
I lift my lamp beside the golden door!”

Then, there are some realities that reflect another aspect of who we are: 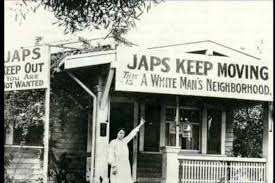 As much as it might want to present itself as a refuge open to all, America has been, as CNN argues, a nation that "virtually wiped out Native Americans, enslaved Africans, excluded Chinese immigrants in the late 19th century and put Japanese Americans in concentration camps." The New York Times' columnist David Brooks, acknowledging this portion of our American history, calls it "essentialism," the opposite of "liberalism," and he thinks that this kind of "anti-liberalism" is likely to triumph.

Whenever the word "is" is used as an equals sign, it always tells lies. Always! What "is" America? What are we? Who am I? Walt Whitman put it this way:

Let us forgive our past and current mistakes and inhumanities. They have been, and continue to be, real. And then there are those three basic documents of American democracy: The Declaration of Independence, the Constitution and The Gettysburg Address. They, too define our truth. We do "contain multitudes," and so don't we all. Both good and bad!

There is no definition for America, however accurate as to historical fact, that could ever define or contain us. Saying that this "is" who or what we are (whatever we then say about that) is to make a huge error. We make our path by walking. We define ourselves by acting, and we always start from where we are, right here. We start from right here, right now, and we can choose. In fact, we must!

America can still save the world. I hope we will. But we will do that only as we admit the world into our ranks: