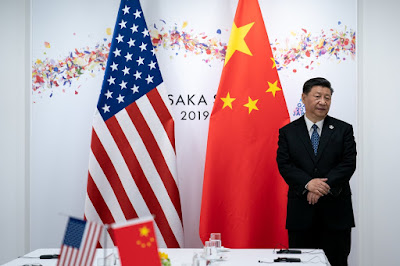 "War" may be our favorite metaphor. We have the "War on Drugs." We have the "War on Poverty." We have the "War on Crime." We have the "War on Terror." Recently, I found my son reading a book called "The 33 Strategies of War," by Robert Greene. My son had picked it up, he told me, at the Santa Cruz Public Library. Greene is noted as an expert on "strategy, power, and seduction." He tells us that LIFE ITSELF is basically a "War." I was only partly pleased to discover that General George S. Patton got a rather favorable mention in Greene's book. Despite my name, I have resisted the idea that there might be a familial connection.

Last Friday, I read a column by Paul Krugman, the retired Princeton economist who writes for The New York Times. "Trade War" was the topic, and Krugman contends that "Trump Is Losing His Trade Wars."

Might I suggest (think about it) that "War," itself, is a losing proposition in virtually every circumstance. The United States is engaged in many foreign wars. We are losing them all. We are also not winning any of those economic and political "Wars" listed above. I guess some might take Trump's word over Krugman's, and think we are winning the "Trade Wars," but I think I'm going to go with the economist on this one. We are losing our "Trade Wars," too.

"Conflict" is inevitable. "War" is not. In the arenas of politics, economics, social policy and international relations, I suggest we drop the "War" metaphor.

Let's give ourselves a break and get off what Greene postulates as the "battlefield of life."

Whenever we have differences, let's work it out! I am really tired of the idea that to achieve what we want to achieve we need to kill someone else.