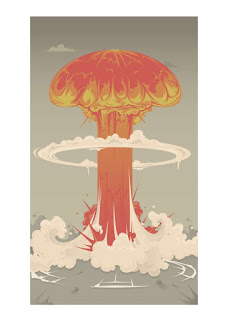 In an editorial commentary published in the May 19, 2019, edition of the San Francisco Chronicle, a commentary that may or may not be available to the readers of this blog (given the way contemporary "paywalls" work), David Davenport talked about the "war" metaphor. He called "war" the "new normal."

Davenport is a research fellow at the Hoover Institution, which is not, generally, one of my favored think tanks. However, it appears to me that Davenport is making a pretty good point in his commentary. In fact, I am thinking of ordering up his new book, written in collaboration with Gordon Lloyd, How Public Policy Became War.

Davenport points out that when we decide to address our public policy problems by making "war" on them, the net result is always the transference of governmental power to the executive branch. The "war on drugs," the "war on crime," the "war on poverty," and the "war on terror" all lead to autocracy.

Having not so long ago listened to some expatriates of the sixties talk about "sex, drugs, and rock and roll," I am thinking back to a sixties-era advisory: "Make love, not war!"