Pictured is Janet Blaser, a one-time resident of Santa Cruz, California, now an expatriate living in Mazatlán, Mexico. Why did she leave my wonderful hometown? Well, Blaser wrote a whole book about that decision, recently reviewed by Wallace Baine in the Good Times newspaper.

The Good Times focuses on all things Santa Cruz, with a particular interest in lifestyle and entertainment items. It is exactly the right place to look for articles about "good times," and based on Blaser's experience, and the experience of another twenty-six women who contributed to her book, the best of the good times currently available to Americans may be found south of the border. Here's the cover of Blaser's book, reported to be available at Bookshop Santa Cruz: 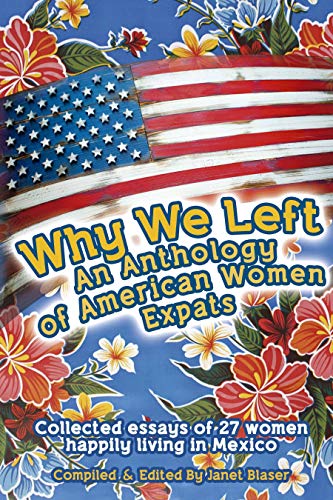 I haven't yet read this book, but I have a copy, and it is definitely on my list. I was surprised to learn, as I read Walllace Baine's article, that the expat stories collected in the book do not "run into a strong vein of political anti-American exhaustion or disappointment."

“I had anticipated that there would be more women who would say, ‘Oh, when Trump was elected, that was it. I’m outta here,’ or had some other complaints about America," says Blaser. "But that was really not the case.”


I have heard lots of people say just the opposite, and that the polarized and dysfunctional politics of the United States is making them think seriously about moving to some other country. Blaser, and the other women profiled in Blaser's book, make the case for leaving the United States for Mexico.

For a different idea, which suggests that you stay put in the United States, you might want to consider what Jennifer Lawrence has to say about how to deal with our dysfunctional politics and our atrophied democracy. On the Fourth of July, as we think about our politics and government, the option that Lawrence recommends might make a lot of sense to a lot of people. The video is about twelve minutes long, and....


It has a message that is absolutely appropriate for our national holiday: