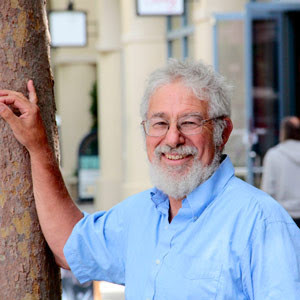 Mike Rotkin, pictured above, is the one-time "socialist-feminist" Mayor of Santa Cruz, California, which is my hometown. Mike ran the Community Studies Program at the University of California, Santa Cruz for many years, and he is still teaching there. He is a member of the Santa Cruz County Regional Transportation Commission, and is deeply engaged in the political life of the community.

Mike also knows a good book when he reads one.

I would like to pass on one of Mike's recommendations, having now read, at his urging, We The Corporations, by Adam Winkler. I have placed a picture of the book's cover to the left.

I agree with Mike that this is a very good book, and I encourage you to get beyond the cover. The book documents what Winkler calls the "corporate rights movement," and takes its readers from the beginnings of corporations in ancient Rome to Citizens United in 2010 and the Hobby Lobby case, decided by the United States Supreme Court in 2014.

The Hobby Lobby case gave corporations a right to religious freedom, just like you and I have religious freedom. What's good for us, in the First Amendment, is apparently good for those corporations, as well. We know that the Hobby Lobby corporation favors a right-wing evangelical brand of Christianity. We are still waiting to find out the religious preferences of Monsanto, General Motors, and Bank of America, but it's good to know that these corporate giants don't have to provide medical care for their employees if it's against the corporate religion. That's what the Supreme Court held in the Hobby Lobby decision.

Besides documenting in fascinating detail how our legal system has dealt with corporations, Winkler's book is a great way to learn about how our Supreme Court functions.

We The Corporations is now an official Rotkin-Patton recommended read!