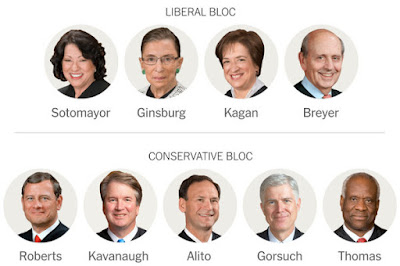 The United States Supreme Court handed down two important decisions on Thursday, June 27th. The current members of the Court are pictured above, conveniently catagorized by The New York Times.

In Rucho v. Common Cause, the Court held that when state legislatures establish gerrymandered Congressional Districts, by drawing politically-motivated maps, the federal courts will simply not entertain any challenge to such maps. According to Chief Justice Roberts, writing for the five "conservative" members of the Supreme Court, any challenge to the legitimacy of such partisan maps  is simply "nonjusticiable." If you click this link, you can read an article in The New York Times that reports on the decision in Rucho v. Common Cause. The Times has also editorialized about the decision, summing up the decision as follows: "The justices said partisan gerrymandering, no matter how flagrant, is beyond the reach of the courts, imperiling the fairness of future elections."

Justice Kagan filed a dramatic dissent in Rucho v. Common Cause, part of which I quote below:

“Of all times to abandon the Court’s duty to declare the law, this was not the one,” Kagan wrote, reading her blistering dissent from the bench Thursday, a move that generally indicates deep disagreement with the majority opinion. The practices challenged in these cases imperil our system of government. Part of the Court’s role in that system is to defend its foundations. None is more important than free and fair elections.”

The second case decided by the Supreme Court on June 27th was Department of Commerce v. New York. The Court decided, in a unanimous decision authored by Chief Justice Roberts, that the head of the Department of Commerce, Wilbur Ross, had not adequately justified his decision to include a question about citizenship in the questionnaire to be utilized in administering the 2020 Census. Once again, The New York Times reported on this decision in its news columns. The paper editorialized about the decision, too:

The nuanced ruling, written by Chief Justice John Roberts, noted that Commerce Secretary Wilbur Ross’s decision to add the citizenship question “was reasonable and reasonably explained,” despite the Census Bureau’s misgivings about the move. As recently as last week, bureau experts warned that adding the question would result in a significant undercount of households with at least one noncitizen member. Mr. Ross “determined that reinstating a citizenship question was worth the risk of a potentially lower response rate,” Chief Justice Roberts wrote, because of “the long history of the citizenship question on the census.” Mr. Ross had argued that the question was needed to help the Justice Department better enforce the Voting Rights Act of 1965.

Later in the ruling, however, the Chief Justice wrote that the voting rights rationale offered by Mr. Ross depended on an “incongruent” explanation that wasn’t supported by proper evidence. “It is rare to review a record as extensive as the one before us when evaluating informal agency action — and it should be,” Chief Justice Roberts wrote. “But having done so for the sufficient reasons we have explained, we cannot ignore the disconnect between the decision made and the explanation given.”

The decision in Department of Commerce v. New York was not rendered as a "final" decision. The Court remanded the case for further deliberations, which means that the Trump Administration was allowed to come back to the Court with a better justification for its proposed question on citizenship. Initially the Administration decided not to do that, but it seems that this initial reaction may then have been "trumped" by the president, based on one of the president's tweets.

Because the Administration will ultimately do whatever the president directs, it is not yet clear what the Administration's response to the decision will ultimately be. Perhaps, the Administration will try to  come up with something that will satisfy the Court, and if it does, the federal government will be able to ask that citizenship question as part of the 2020 Census. That, in turn, as Chief Justice Roberts acknowledged, will lead to a very significant undercount of those non-citizens present in the United States at the time of the census. Many non-citizens, knowing that they would have to "out" themselves as undocumented by responding to the census questionnaire, will choose not to participate at all. Here's the final line from The Times' editorial:

The justices deserve credit for sending the case back for more thoughtful decision-making. After oral arguments in April, many court watchers expected that they would repeat the mistake of the court’s travel ban ruling and ignore the Trump administration’s evident bad faith. Fortunately, they were wiser this time around.

In April 2019, The Times said that allowing that citizenship question as part of the census would be "a coup with profound implications for American democracy." In effect, such a decision would permit state legislatures not only to deny federal support to urban areas, generally more "liberal," and to furnish additional federal support to rural areas, generally more "conservative." Even more importantly, census data on citizenship would provide a powerful new tool to help those state legislatures so inclined to gerrymander Congressional Districts to benefit Republican Party incumbents. Depending on what the Trump Administration decides to do, we will get to see whether or not the Court will actually resist what The Times has properly characterized as the Trump Administration's "bad faith."

There is a common theme in these recent decisions. They are both bad, but there is a kind of "tough love" message in what the Court tells us in each one of them.

Here is the bottom line: The Supreme Court, and the federal courts in general, are not going to save us from the elected officials that we have placed in office (even if those officials were elected only because of rampant gerrymandering). Our solution to bad politics is in our own hands. We need to devote enough energy and attention to politics to be sure that the elected officials who represent us will do so in "good faith," not bad faith. The courts are not going to save us!

Let me provide that video from yesterday's blog posting once again. It's a short course in American democracy. That's what we have to rely on, not the courts!