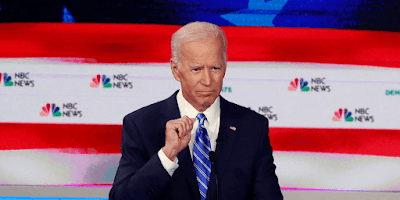 The reviews are in, and "Joe Sixpack" lost. That title was bestowed on former Vice President Joe Biden by Maureen Dowd, who wrote a column in The New York Times with the following headline: "Kamala Shotguns Joe Sixpack." Frank Bruni, another Times columnist, had a similar analysis. The headline on Bruni's column read: "And Now, The Dream of a Harris-Buttigieg Ticket."

A phrase from the jury trial selection process comes to mind as I consider my personal judgment on what happened on Thursday, June 27th. Here's what I think a trial lawyer would have said to Joe Biden, after that debate was over, presuming that the debate was seen as being analogous to the selection process related to picking jurors for a trial:

The people would like to thank and excuse Mr. Biden.

Let's not forget the "thank you." I, personally, appreciate the former Vice President's willingness to put himself forward as a possible candidate - and for his long and honorable service to this country. I was prepared to believe that picking the former Vice President might be the right choice. He is, after all, someone who has been involved in government since 1970, when he was first elected to the New Castle County Council at age twenty-eight (I kind of have a thing for former County Supervisors). Biden was elected to the United States Senate in 1972, which is actually extraordinary. He served, I think, very honorably throughout his entire career. I watched the recent debate with a willingness to be convinced that maybe our former Vice President could lead the Democratic Party to a victory in 2020. That must mean, of course, a victory not only in the presidential race, but in the race to maintain Democratic Party control of the House of Representatives, and to attain a majority in the United States Senate. Candidate Michael Bennett made very clear, during the debate, that this, in fact, the task at hand.

My judgment, having watched during both days of the debate, is that we are not going to be able to rely on our former Vice President to do what has to be done to win back the presidency and to help the Democratic Party recapture the Congress. I think this perception is widespread, and is not restricted to a couple of New York Times' columnists. I feel a real sense of gratitude that this realization comes so early. Now, we can focus on other alternatives. There is a difficult set of decisions ahead.

Is the "dream team" we need really Kamala Harris and Pete Buttigieg, as Frank Bruni suggests? Despite all the scoffers, could it be that Bernie Sanders is actually the best person to lead the kind of "revolution" that truly is needed? What about Warren and Castro  as a "dream team" ticket?

There are no easy answers. Not for me, anyway. But after the June 27th debate, at least as far as I am concerned, it is now clear that the Democratic Party "dream team" is not going to be led by Joe Biden.

Thank you, Mr. Vice President! You are excused.