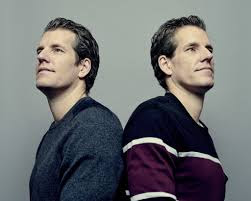 The Winklevoss twins (Tyler and Cameron Winklevoss, pictured from left to right in the picture above) hung out with Mark Zuckerberg at Harvard University (before Zuckerberg quit school to found Facebook and become a billionaire).

Actually, Zuckerberg stole the whole idea of Facebook from the twins, and then cut them out of the deal. That is their story, anyway. A recent article and book review, in the "Datebook" section of The San Francisco Chronicle, refreshes our recollection about the Winklevoss past, and then gives us an update on their latest doings.

And what are those latest doings? Well, those doings are presented in a new book by Ben Mezrich, Bitcoin Billionaires: A True Story of Genius, Betrayal, and Redemption. That's right, the Winklevoss twins, having been edged out by Zuckerberg (that's the "betrayal" part) have come back strong. They, too, are now billionaires, all thanks to cryptocurrency. Being a billionaire equals "redemption," the way Mezrich sees it.

I have no strong position on who is the best (or worst) billionaire, as between Zuckerberg and the Winklevoss twins. I am probably a "plague on both their houses" type, and an equal opportunity detractor. I am drawing your attention to this article for one reason only. I want to urge some caution as we contemplate eliminating any governmental responsibility for maintaining the integrity of our currency. Mezrich, in the "Datebook" article, suggests that making government responsible for the integrity of our money is dangerous.

Well, sure. I guess. Mezrich says that "in Cyprus, literally overnight, they just took everyone's deposits, took a percentage of everyone's money [and] up to 50% of your money just vanished the next day." That sounds bad! But when that happens with cryptocurrency, there isn't anyone against whom you have recourse, because the system is set up so that "no one" is in charge. Government does bad things, but government isn't bad in and of itself, which is the implication of the Mezrich argument. When the government is responsible for the integrity of our money supply, we do have an opportunity to make the government respond to what we think is right and just. With cryptocurrency, as far as I can determine, we don't have that option.

That is my advice!