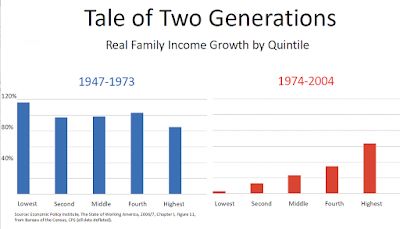 If you click the picture above, it should get larger. The chart appeared in an article written by Frances Moore Lappé, which was published on the website of the Small Planet Institute.

In ten columns is the tale of two generations. The blue bars capture the late 1940s through the early ‘70s when real family income roughly doubled for every income quintile, with the poor gaining the most.

Then…whoa! From the early ‘70s through the early 2000s, progress slows radically and the pattern of who gains most reverses: The richest score big time, while the poorest advance virtually not at all. Such dramatically deepening inequality has continued to worsen, not only reducing economic opportunities but shortening lives as well: The life-span gap between the richest and poorest American males is 15 years, and in recent years, overall longevity has declined.

Lappé's analysis is as follows:

In the first period (blue bars), Americans absorbed the notion that we could all advance together — that government was established to support the “general welfare.” After all, that is what our constitution’s preamble affirms as a purpose of our government.

The first period benefited from FDR’s New Deal that catalyzed sweeping gains for all Americans — from establishing the minimum wage and Social Security, to strengthening workers’ rights to organize, to bolstering banking industry rules. Well into mid-century, both Republicans and Democrats embraced government as a partner in setting standards and expanding opportunity.

Republican Dwight Eisenhower ran on a platform that included the pledge to “more effectively protect the rights of labor unions” and to “assure equal pay for equal work regardless of sex”; Democrat Lyndon Johnson launched the War on Poverty, which helped cut the poverty rate almost in half between 1959 and 1969; and Republican Richard Nixon signed the Clean Air act into law in 1970.

But soon, the business community feared it was losing ground and began actively, and effectively, putting forth an opposing story, as laid out in Jane Mayer’s Dark Money. In 1971, the Chamber of Commerce commissioned a corporate lawyer, Lewis Powell, to prepare a game plan, known now as the “Powell Memo,” for regaining ground for business. Soon thereafter, in 1977, Ronald Reagan warned Americans to “use the vitality and the magic of the marketplace to save this way of life.” And by 1981, he famously declared, “in this present crisis, government is not the solution to our problem; government is the problem.”

It appears that "collective" approaches to social policy work out for the best. "Individualistic" approaches make things worse for all but the extremely rich. That is basically what Lappé is saying in her article, "The Shocking Tale of Two Generations." It doesn't take too long to read her article. It's worth reading.